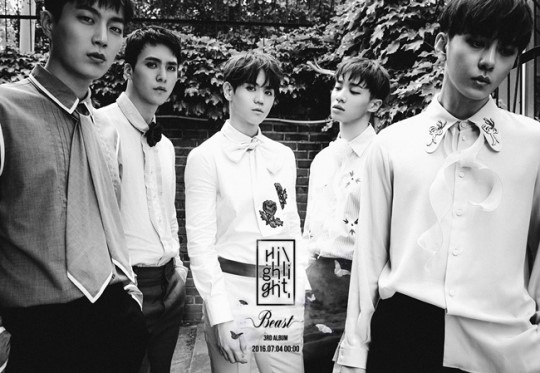 It has been announced that BEAST members Yoon Doo Joon, Yong Junhyung, Yang Yoseob, Lee Gi Kwang, and Son Dongwoon will be promoting under a new group name.

On February 24, the group’s management agency, Around Us, announced the group’s new name to be “Highlight.” The agency stated that they have decided to let go of the group’s previous name and works in order to begin anew and return to their fans more quickly.

The group had been in a legal dispute with former agency, Cube Entertainment, over the legal rights to the group’s name and the works they had created under the label.

“We would like to announce that Yoon Doo Joon, Yong Junhyung, Yang Yoseob, Lee Gi Kwang, and Son Dongwoon, who were previously known as the group BEAST, will be promoting under a new group name.

With the significance of ‘the brightest part’ or ‘the most exceptional or striking,’ ‘Highlight’ was the name of the first album BEAST made under Cube Entertainment as a five-member group. At the time, the album was named that to signify their emotions as they began anew as five members. Now, the singers will use ‘Highlight’ to mark the start of a new beginning for the group.

We would like to thank the fans who tirelessly waited for the group to return. Furthermore, although the group can no longer use their previous name, we would like to sincerely thank Cube Entertainment and CEO Hong Seung Sung for creating the group that will henceforth be known as Highlight.

Beginning anew, no matter what the situation, is always nerve-racking, so we are preparing carefully. Even though it has been nine years since their debut, as they have had to give up their successful and bright past as BEAST, we believe the group members will feel the same as well. The five artists wanted to return to the public and to their fans more quickly and hope that the public will be understanding of their intentions.

To those who are reading this statement, we ask that you love and cherish the members of Highlight even more than before. We at Around Us will work our hardest to do right by our artists. We ask for your continued support, interest, and love of our five artists as they begin anew as Highlight.”

Soompi Spotlight
BEAST
Highlight
How does this article make you feel?