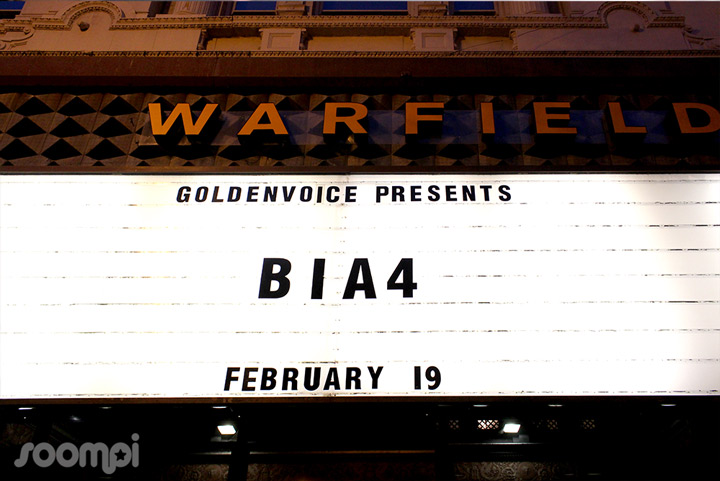 San Francisco was lucky enough to be one of the locations for B1A4 Four Nights in the U.S. 2017. Additional stops were in NYC, Chicago & LA. BANAs could not have asked for a more perfect performance. If you weren’t there then don’t worry because here are the 5 best moments of the San Francisco show. We decided to rely on fans for the images of this article and chose our favorite Tweets from the evening. Please enjoy!

Walking up to the venue you could feel the love and excitement from all of the BANAs in one place. Sprouts peeked from the hundreds of heads on the street waiting for the concert to begin. You could feel the love and unity although fans waited for hours in the cold, frigid weather. Once everyone rushed in, they kept their spirits up and welcomed B1A4 with tons of energy!
Possibility to insert photo here.

YOU READ THAT RIGHT. B1A4 not only graced us with their talent, humility and beauty but also performed the whole album of ‘Good Timing’ for us in person! ‘Nightmare’, ‘Good Timing’ and title track ‘A Lie (거짓말이야)’ Seriously, could we ask for anything more?

All of the members did their best to speak English with the crowd making this special night even better! Baro spoke the most English and it was AMAZING! Throughout the show, the crowd went wild as Baro kept saying ‘Are you ready to get lit tonight.’ One of the most touching statements was when the group told us about their trip to PIER 39 and how it had great crab and a great view. Then Baro continued to say, “It really tasted good, but BANAs are better than seafood. Really pretty too! Crab is not pretty, but very delicious. SF’s love is better than crab. It was good but it was sad because it would’ve been better with you.” Whoever their English teachers are, THANK YOU for bringing BANAs one step closer to the members!

As if a whole album wasn’t enough. B1A4 treated us to even more songs as we entered the time machine. What is the time machine, you might ask. As Baro put it, “We have a special gift for you. We’re gonna take a time machine. Time machines are very expensive, but we brought it for you. We’re going to go back to when we first debuted. For this to happen, we need your energy San Francisco. Like Superman!” This made BANAs go wild as B1A4 then performed classics like O.K., Beautiful Target and Baby.

We could hear B1A4 loud and clear and can we just say that we were in heaven! These boys are so talented! The concert could not have been any better. Please tell us they’re coming back soon, because we miss them already. Thank you Jinyoung, Baro, CNU, Gongchan, Jinyoung & Sandeul.

We’d like to thank CJ E&M and Powerhouse for inviting us to cover the wonderful showcase! Be on the lookout for our exclusive #AskB1A4 Interview using your questions!