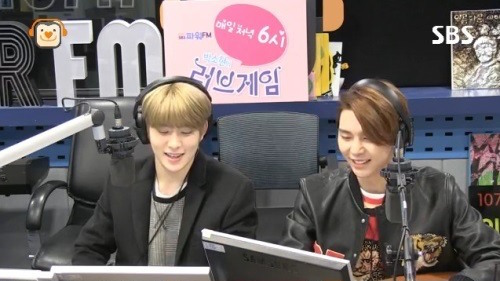 On the February 24 broadcast of SBS PowerFM’s “Park So Hyun’s Love Game,” NCT 127’s Johnny and Jaehyun were guest DJs for a day, as regular host Park So Hyun was currently recovering from an injury.

The two roommates expressed their feelings of hosting a radio show on their own, and satisfied listeners’ curiosity with talks about their dorm life and eating habits.

One of these curious fans sent in a question that asked if the two members have ever fallen in love.

After amusingly giving a standard answer about how he is currently in “love with the fans,” Jaehyun revealed how he was the type who would confess. “If there is someone I like, I tend to be very forward, even if I feel embarrassed,” he explained.

On the other hand, Johnny stated, “I’m not good at confessing to a girl I like. I’m the type who gets nervous and worries that it won’t end well.”

During the broadcast, Jaehyun also commented on his friendship with BTS’s Jungkook, who had written a shoutout to the NCT member in the “thanks to” section of their album. “Actually, a chatroom on KakaoTalk was made just for same-aged idols born in 1997. We became closer [while talking] in that chatroom,” Jaehyun revealed.

In addition, the two idols gave an encouraging shoutout of their own to fellow NCT member Mark, who is currently a contestant on Mnet’s “High School Rapper,” and promised they would watch the show live.

Are you more like Johnny or Jaehyun when confessing?