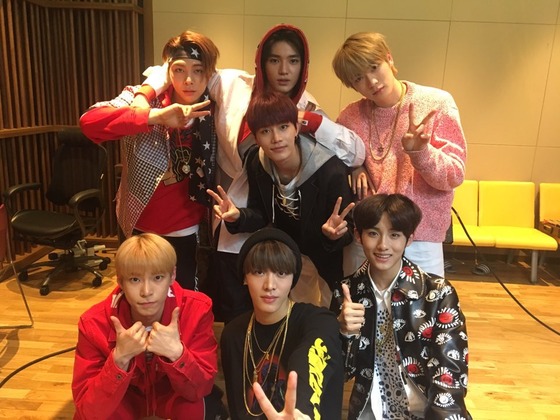 The boys of NCT 127 had a blast while appearing as special guests on MBC Standard FM’s “Kangta’s Starry Night”!

Host Kangta was joined by NCT members WinWin, Taeil, Doyoung, Taeyong, Johnny, Yuta, and Jaehyun on the February 28 broadcast of the show.

After the members formally introduced themselves, Kangta told WinWin that he resembles TVXQ’s Changmin. Upon hearing this, the other members responded that WinWin also seems to think so too.

Kangta then asked Doyoung when he thinks he looks the coolest.

“I think I look cool every day when I see myself in the mirror,” Doyoung answered quickly. He humbly retracted right away, adding, “Actually, I responded with ‘when I look at the mirror’ because I was trying to answer quickly.” The other members laughed and playfully teased him, insisting that the words people say without thinking first tend to reveal their real opinions.

Later, Taeyong selected Doyoung as “the biggest nitpicker of the group.” However, according to the other members, it was actually Taeyong himself. They then shared that he has a habit of monitoring their broadcasts a lot and “nags the most too.”

As the episode drew to a close, Taeyong expressed that he “wanted to eat chicken.” Kangta suggested to NCT 127’s manager that they go out for a ‘company dinner’ of chicken and beer and make SM Entertainment cover it. Upon hearing this, the hungry NCT 127 members cheered.

Do you think Winwin and Changmin look alike?

*A previous version of this article stylized WinWin’s name incorrectly.