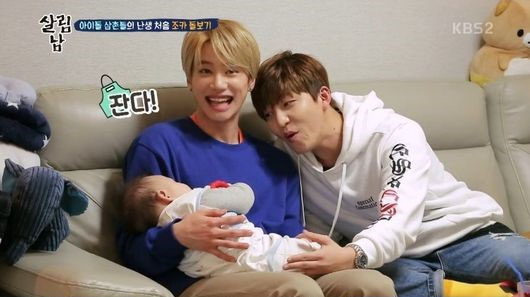 The babysitting skills of Eli’s U-KISS group mates were put to the test on a recent episode of “Men Who Do Housework”!

On the March 1 broadcast, U-KISS members Soohyun and Jun paid a visit to Eli’s house to visit his baby son Minsoo.

During the episode, the boys were rehearsing when they got hungry and suggested they go to Eli’s house to grab a bite to eat. After Eli called his wife to let her know, the three were on their way.

Upon arriving to Eli’s house, Soohyun took one look at Minsoo and exclaimed about how big he is, which accidentally caused Minsoo to cry at the sudden loud noise. While Eli and his wife prepared food in the kitchen, Soohyun and Jun were put in charge of watching him.

While they waited for their food to be ready, Soohyun prepared a test-run “doljabi,” a fortune telling game that Korean families play on a child’s first birthday. In the game, various knick-knacks symbolizing the baby’s future are laid out in front of them, and whichever item the baby picks up predicts their eventual career. In Minsoo’s case, he skipped over money – a symbol for future wealth – for a toy cop car, to the amusing disappointment of his “uncles.” 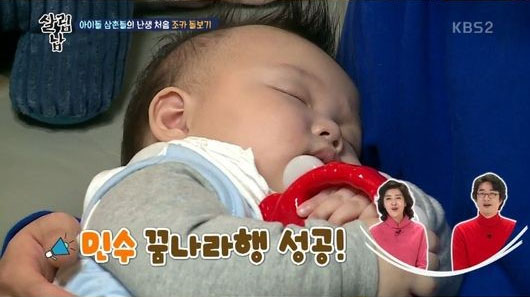 Later, Soohyun sang Minsoo a lullaby that caused him to fall asleep against Jun’s chest. Upon seeing this, Eli’s wife told Jun that it was the first time he had fallen asleep against someone else like that. “It’s a miracle,” a surprised Eli commented.

After holding Minsoo to him for three minutes, Jun admitted that his arm felt really tired. “However,” he began, “Minsoo is sleeping like an angel, so I’ll continue dealing with it. Eli is really great [to always do this].”

Would you let Jun and Soohyun babysit for you?

Eli
Soohyun
U-KISS
Jun
Men Who Do Housework
How does this article make you feel?