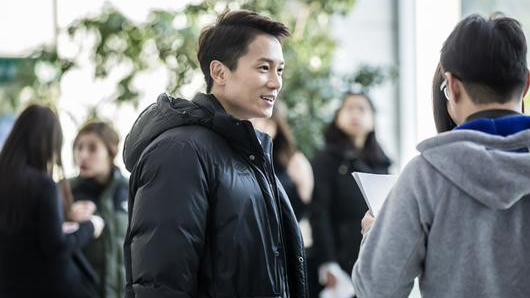 Watch: Ji Sung and “Defendant” Actors Are All Smiles In Blooper Clip

Recently, actor Ji Sung uploaded a short video clip to his personal Instagram that demonstrated the chummy atmosphere on the set of SBS’s “Defendant.”

The posted video showed part of a scene from episode 11 in which Ji Sung, Jo Jae Yoon, and Oh Dae Hwan’s characters are in the midst of a serious discussion. After Ji Sung delivers his line in a very sincere manner, Oh Dae Hwan makes an extremely comical face at the two other actors. This causes all three actors to burst out laughing, causing a blooper of the scene.

The cast and crew of “Defendant” have continued to show how close they are over the course of the drama’s broadcast. Recently, it was revealed that the writers of “Defendant” wrote in the birthday scene to celebrate actor Ji Sung’s actual birthday. Furthermore, behind-the-scenes photos showed the familial affection, even off-camera, between Ji Sung and Shin Rin Ah, the child actress playing his daughter in the drama.