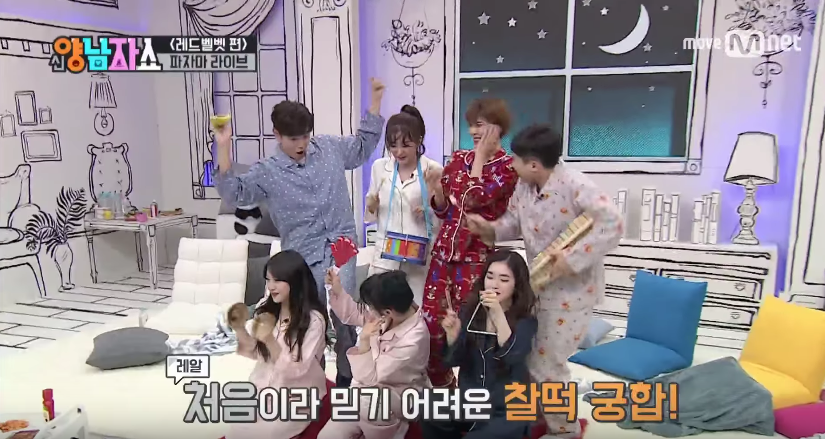 Asking idol groups to sing and dance their songs in different ways is a popular trend in variety shows these days, and Red Velvet doesn’t disappoint with their newest takes on “Rookie” and “Russian Roulette”!

When they appeared on the March 2 episode of Mnet’s “New Yang Nam Show,” the girl group joined the show’s hosts in a casual jam session, complete with toy instruments, all while they’re decked out in sleepwear. During their adorable “pajama live” of “Rookie,” the members couldn’t stop smiling as they let themselves go to the beat of the music.

It didn’t stop there, as they also played a “Korean alphabet” game with another one of their hit songs, “Russian Roulette.”

Red Velvet was instructed to dance the normal choreography, but anytime the syllables “yi” or “ji” appeared in the lyrics, they had to do a swooping motion with their hands and legs. While it may sound doable, the quick pace of the song left the girls in utter confusion as they tried to listen and dance at the same time.

Hilariously, Yeri always came in early or late, and the other girls didn’t fare much better, but they managed to all successfully do the motion at least once together at the right time before the end.

Red Velvet
New Yang Nam Show
How does this article make you feel?