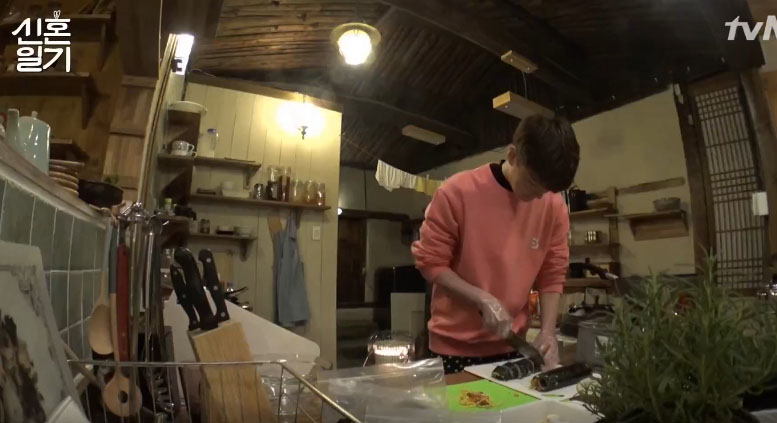 Could Ahn Jae Hyun be any more romantic?

The actor recently gained attention for a romantic gesture he prepared for Ku Hye Sun on their reality program “Newlywed Diary.”

On the March 3 episode, the couple dealt with being apart from one another, as Ahn Jae Hyun had to go overseas for a two-day, one-night business trip.

Already missing his wife, the actor decided he would surprise her by cooking her something special. Before leaving on his trip, he woke up early and prepared a plate of kimbap. He left it on their kitchen table with a heart-shaped handwritten message that read “Darling, I love you. I’ll see you soon.”

When Ku Hye Sun finally woke up and found the food waiting for her in the kitchen, she was extremely surprised.

“From 4 a.m., I began hearing a rustling sound in the kitchen. I thought, ‘He must be preparing something for me again,'” she joked to the camera.

However, as much as she liked to tease her husband for his love of romantic surprises, she was truly touched by the food he prepared.

“I had mentioned [to him] that I wanted to eat kimbap [a few days] earlier,” she revealed.

Check out the full clip of Ahn Jae Hyun’s romantic gesture in the video below!