It looks like all the secrets of Mo Tae Goo (played by Kim Jae Wook) will be revealed in the upcoming episode of OCN’s “Voice,” which will air on March 5.

The final scene in episode 13 that aired on March 4 had Moo Jin Hyuk (played by Jang Hyuk), Kang Kwon Joo (played by Lee Ha Na), and Mo Tae Goo head off face to face for the first time. When Kang Kwon Joo heard Mo Tae Goo’s voice, she became lost in the memory of the voice of the person who killed her father three years ago, and she clenched her first in fear and rage. 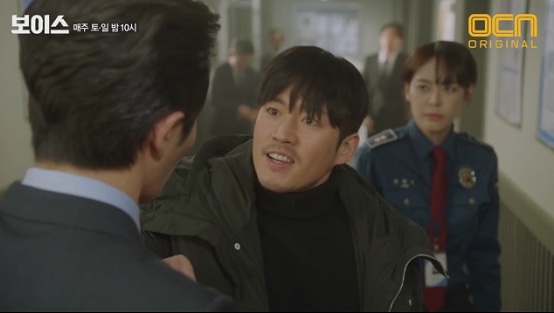 The upcoming episode will lay out all of Mo Tae Goo’s secrets. The teaser showed Moo Jin Hyuk grabbing him by the collar while Kang Kwon Joo had rage in her eyes. Another shot showed the detective in an undisclosed location saying, “I think I found it,” while he tells Mo Tae Goo, “You’re finished.”

It will also be revealed who the insider working against the police force is. Mo Tae Goo and Nam Sang Tae (played by Kim Roe Ha) have used their wealth and power to bribe various high-level officials, also using an insider to gain information about various investigations.

Episode 13 of “Voice” scored viewership ratings of 4.6 percent, keeping it in first place in its time slot for the 12th consecutive week.

“Voice” airs every Saturday and Sunday at 10 p.m. KST.

Catch up with the latest episode of OCN’s “Voice” below!