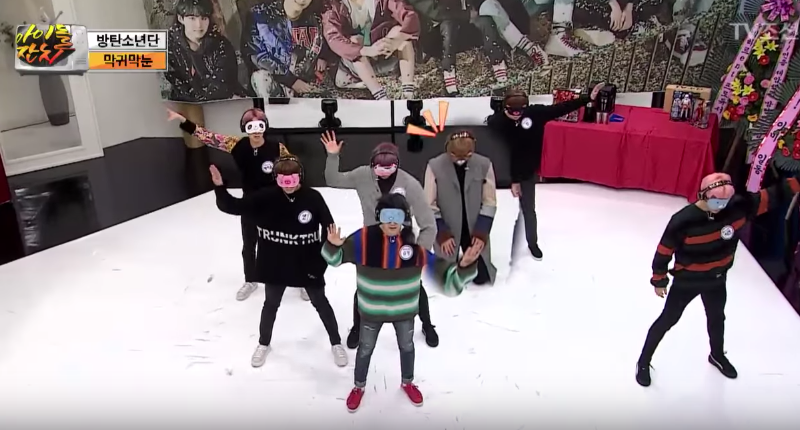 Watch: BTS Takes On Another Challenge And Tries To Perform “Not Today” With Covered Eyes And Ears

During a guest appearance on the March 7 episode of TV Chosun’s “Idol Party,” BTS was tasked with yet another dance challenge which resulted in hilarious results, courtesy of V!

The group had to be blindfolded and had ear plugs as well as headphones on, in order to block their vision and hearing. They then had to dance to one of their newest songs, “Not Today.”

After some unknown start signal (how they knew when to start is still a mystery), Rap Monster kicks things off, thankfully in time. However, the group immediately fails their mission when V completely lost track of the song from the very beginning, and didn’t stand up when he was supposed to.

While V was lost in his own world, the other members attempted to continue the challenge, although formations were out of the question. The mischievous MCs couldn’t just stand by and watch, and randomly began to take the blindfolds of members who were doing well.

Bewildered at first, Suga, Jungkook, and J-Hope began to laugh at the remaining members, with Rap Monster and V at the edges of the room, and Jimin crashing to the ground after a collision with Jin.

The show also released fan cam versions of the whole group as well as V, which you can check out below!

BTS
Idol Party
How does this article make you feel?