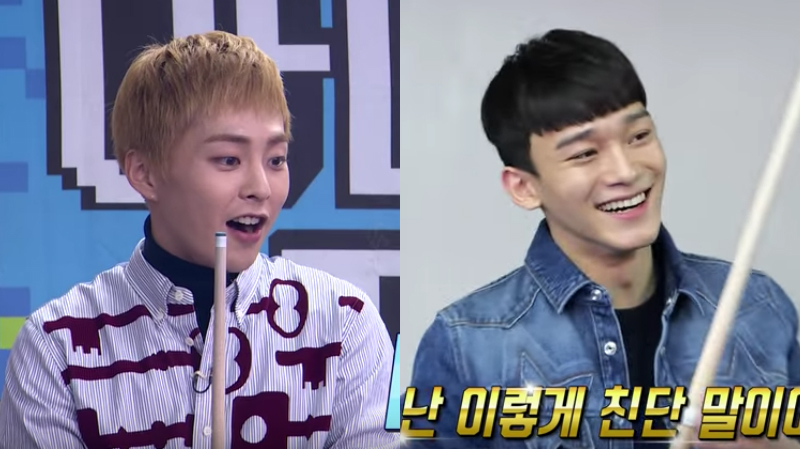 Watch: EXO’s Xiumin And Chen Are Peas In A Pod When Eating, But Not While Playing Billiards In Variety Preview

As shown in the first teaser with Baekhyun, the trio will be going head-to-head in a game of billiards, which is one of their known favorite pastimes.

One of the preview videos is centered around EXO’s oldest member, Xiumin, who is more interested in the bowl of noodles calling his name rather than in finishing a match of billiards with fellow member Baekhyun.

After a constant stream of, “Baekhyun, let’s eat,” Xiumin basically hosts his own eating broadcast as he proceeds to deliciously devour his meal. While discussing where they left off with their billiards game, the singer comments that he wants to “beat Baekhyun just this once in an unexpected turn of events,” alluding to his own skill level.

Meanwhile, in his preview, Chen proves to be just as a voracious eater as his fellow member, as he slurps up noodles like an endless vacuum. Although his love for eating seems to be the same as Xiumin, their skills in billiards appears to be completely different since Chen plays “luck[-based] billiards.”

Just as Baekhyun explained, Chen seems to easily make all the shots he aims for because he is a “lucky guy,” to the jealousy of the other two members. While the other two look on with amusingly disgruntled faces, Chen can’t stop grinning as he succeeds in play after play.

The whole episode starring EXO-CBX will be released on March 14, so stay tuned!

EXO
Xiumin
Chen
EXO-CBX
Amigo TV
How does this article make you feel?