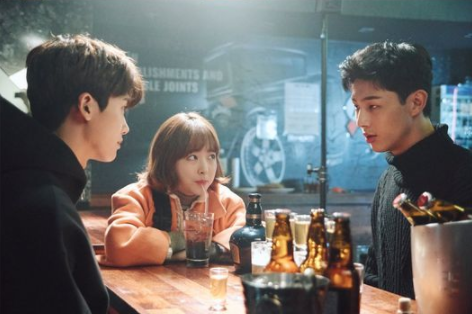 In the recent episode, Do Bong Soon (Park Bo Young) comes across the criminal for the third time after he tries to kidnap her best friend. Upon hearing the news, In Gook Doo (Ji Soo) becomes increasingly worried about her and asks Ahn Min Hyuk (Park Hyung Sik) to hide Do Bong Soon at his house. By the end of the episode, In Gook Doo rushes into Ahn Min Hyuk’s house and informs him that he will also be staying with them.

One of the stills shows Park Hyung Sik and Ji Soo staring at each other with an intense look in their eyes as Park Bo Young sits between them, while another still hilariously depicts the two men drunkenly sleeping on the pool table together. The upcoming episode promises a competition between Park Hyung Sik and Ji Soo as they will be confronting each other through a series of games such as darts, billiards, and more. Many viewers are excited to see the outcome of this competition.

A source from the production team stated, “Park Hyun Sik and Ji Soo will be showing a fun bromance between the two male characters, and a special romance will unveil as the love triangle continues to develop. The three characters will also be teaming up to catch the killer, so stay tuned for the upcoming episode.”

Meanwhile, the sixth episode of “Strong Woman Do Bong Soon” is set to air on JTBC on March 11 at 11 p.m. KST.