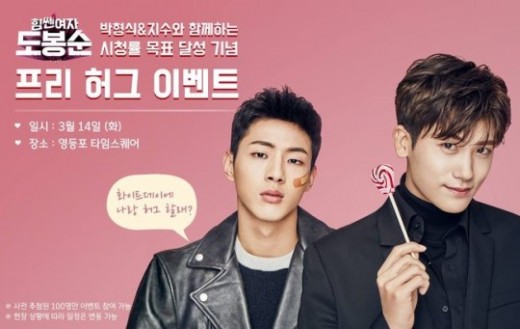 What could be a better White Day present?

It will take place at Times Square in Yeongdeungpo District, and 100 randomly pre-selected fans will be able to receive coveted hugs from these two actors.

The event is Ji Soo and Park Hyung Sik’s way of keeping their promise they previously made at the press conference for JTBC’s “Strong Woman Do Bong Soon.” They had stated that if their first broadcast marked over 3 percent in viewership ratings, then they would give out free hugs. Luckily, the drama marked 4.04 percent according to Nielsen Korea.

Following the event, they will also be keeping another ratings promise they made, where they would walk viewers home. Other cast members from “Strong Woman Do Bong Soon,” Park Bo Young, Im Won Hee, and Kim Min Gyu, have already kept their promise, and walked three viewers home on March 8.

Check out why so many people can’t help but love Ji Soo and Park Hyung Sik in “Strong Woman Do Bong Soon” below!