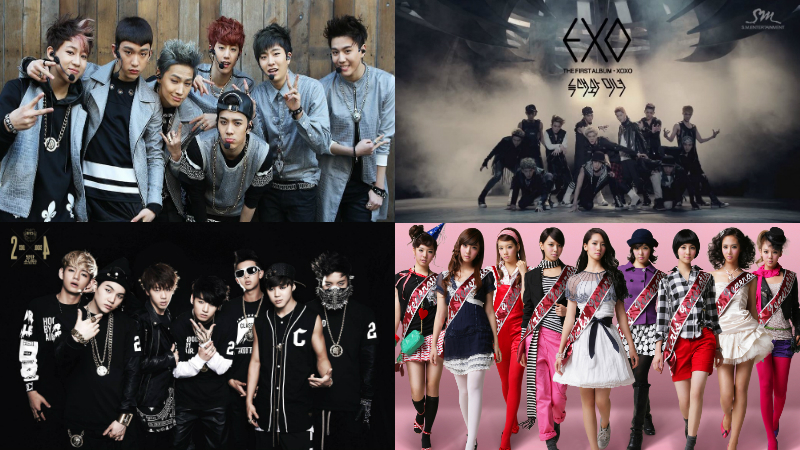 We all know that gut-wrenching feeling of humiliation. Someone brings up an awkward thing you once did, and your entire being tenses up with embarrassment and regret. So imagine how much worse this sensation is for our favorite idols, who have to experience such a thing in the public eye. As a tribute to their sacrifice, here are the top moments when idols had to relive their cringe-worthy pasts.

To kick off the list, there is no one better than GOT7. Having cleverly picked out “A” teasers from 2014, the “Weekly Idol” hosts laugh as the GOT7 members completely lose it. And not only must they bear to watch, the boys must also reenact these shudder-inducing moments. Needless to say, Jackson’s “I told you to stand by me!” (or anyone else’s clip for that matter) will not be forgotten anytime soon.

Next up on the chopping block is AOA. Taking the “Ace of Angels” concept quite literally, these throwback clips show the freshly-debuted members donning angel’s wings as well as some of their old acting and hosting bits. While some thought that enduring the cringe was worth some Korean beef, other members went so far as to cover the monitor playing the video because they couldn’t take the heat.

As always, Bangtan has provided us with no shortage of blackmail material. After bringing some old Japanese acting clips to the surface, all hell breaks loose in the form of bad hair and too much eyeliner. To add insult to injury, BTS must recite these cheesy lines in Korean for the (questionable) pleasure of their fans.

Having debuted back in the ’90s, it’s only natural that SECHSKIES has been subject to a few…incidents. Their movie “Seventeen,” made back in 1998, is certainly a blast from the past that leaves no member unscathed. So it’s all the more hilarious when the group must recreate their most iconic scenes nearly 20 years after they were first filmed.

Although they may seem sweet, Apink fans proved to have no mercy in this “Weekly Idol” segment. Pink Pandas were encouraged to dig up Apink’s darkest moments to present on broadcast, and boy, did they deliver. Even going so far as to find a clip of certain members falling during a performance, the girls were certainly pink in the face after this.

Another group of the ’90s, Shinhwa does not disappoint when it comes to incriminating content. After having witnessed some of Eric’s defining scenes in his acting career, the rest of the members must act out one scene to the best of their abilities. And while Eric does not necessarily cringe at his own acting, his members’ performances surely get to him.

Girls’ Generation is yet another group whose dignity was stolen by “Weekly Idol.” Seeing their past selves dressed like magical girls and casting spells may have been too much, with Sunny declaring, “That’s such a painful moment we want to forget!” We feel you, girl, but that won’t stop us from laughing along.

With these idols, there is an infinite number of ways to humiliate them. From Sunggyu and Sungjong dancing to “Gee” as Girl-finite to L delivering a dramatic line in Japanese, this trip down memory lane is more like a wild ride than anything else. From then until now, it seems not much has changed with these seven.

Throwing it back to 2013, all 12 of the original EXO members recount their pre-debut days and reminisce with some childhood photos. While some members were praised for being cute or good looking, others couldn’t help but cringe at the cruel fate that had been dealt to them.

Although a member short in this episode, Girl’s Day surely isn’t short on laughs. The girls begrudgingly watch their past escapades in search of their “rookie mentality.” And judging from the frantic screams occasionally heard from Minah, most of those clips aren’t a welcome sight.

SHINee’s back, and are more embarrassing than ever. Their poorly-shot parody of the Harry Potter series had everyone literally laughing on the floor. After watching this, everyone acted as if they were emotionally disarmed with the “Onew Expelliarmus.”

The VIXX members are certainly surprised by these little blasts from the past, although not necessarily in a good way. With some members going as far as turning off the hosts’ monitor, you can bet that some of these photos probably haunt the boys at night. But of course it’s all in good fun!

Which one of these moments made you laugh the hardest? Which one made you suffer from secondhand embarrassment? Leave your responses in the comments!