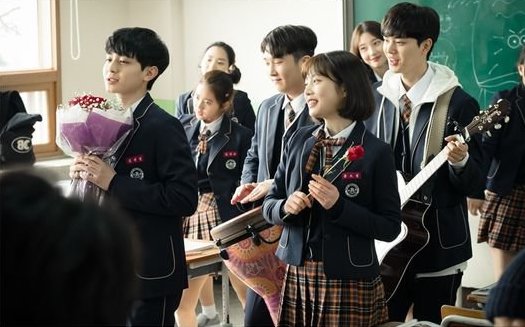 Red Velvet’s Joy, Song Kang, and Park Jong Hyuk from tvN’s “The Liar and His Lover” are set to embark on an epic proposal event.

tvN’s new Monday-Tuesday drama will begin airing on March 20, and will follow the story between Kang Han Kyul (played by Lee Hyun Woo), a genius composer who hides his identity, and Yoon So Rim (played by Joy), a sweet, vitamin-like girl who falls in love with him.

Yoon So Rim, Baek Jin Woo (played by Song Kang), and Lee Gyu Sun (played by Park Jong Hyuk) are best friends and bandmates who have known each other from kindergarten to senior year of high school. They also transform into “Cupids of Love” to help their friends propose to people they’re interested in dating.

The preview stills that were released on March 19 show the trio sending their support to a fellow student who is looking hesitant as he holds a bouquet of flowers, as well as the three students putting their plans into action with a fun performance. The photos reflect the energy and fresh voices that the trio are set to bring to the proposal to make it even sweeter. 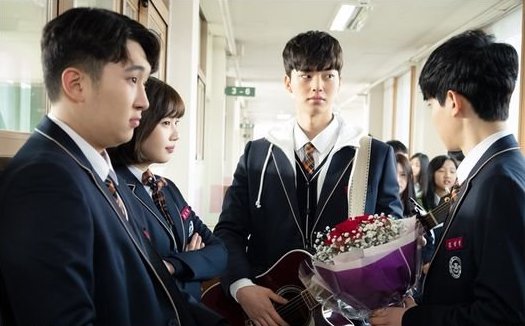 The scene was filmed recently at a school in Seoul, and Joy, Song Kang, and Park Jong Hyuk’s perfect chemistry and lively energy is said to have filled the atmosphere with a happy vibe. It was revealed that Joy’s sweet voice, Song Kang’s guitar instrumental, and Park Jong Hyuk’s jembe drumming created an energy so infectious that the staff couldn’t help but dance to the music.

A representative of the drama stated, “In the drama, Joy, Song Kang, and Park Jong Hyuk are best friends. The trio’s sweet and youthful charm will breathe refreshing life into the drama. Their lovely chemistry will be something to watch for.”

Red Velvet
Joy
The Liar and His Lover
Song Kang
Park Jong Hyuk
How does this article make you feel?