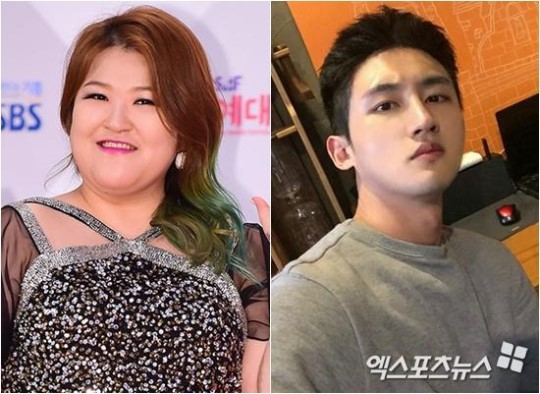 After the March 19 broadcast of MBC’s “We Got Married,” in which Sleepy gave Lee Guk Joo a kiss on the cheek, Lee Guk Joo posted screenshots of malicious comments (about the kiss) on Instagram, firing back at netizens who have been attacking her online, saying that she is collecting screen captures of all the comments and will be taking legal action.

Shortly after Lee Guk Joo made the post, it was deleted.

After seeing news about the post, actor On Si Woo had some words for Lee Guk Joo. He said, “So you feel bad being made fun of in the comments? I wonder how the male celebrities that you sexually harassed during public events feel? When they had to just bitterly smile because they were in a position where they couldn’t be mad. You should’ve been sued ten times over already. Know when you should be embarrassed.”

Lee Guk Joo has been on the receiving end of criticism for some time for taking liberties with physical contact for the purpose of comedy.

After On Si Woo’s public statement against Lee Guk Joo, some netizens have in turn been criticizing On Si Woo, a rookie actor, for using Lee Guk Joo to make his name known, while others have been praising him for saying what they’ve always wanted to say.

On Si Woo’s comment to Lee Guk Joo and his social media account have since been deleted.

Lee Guk Joo
XPN
On Si Woo
How does this article make you feel?