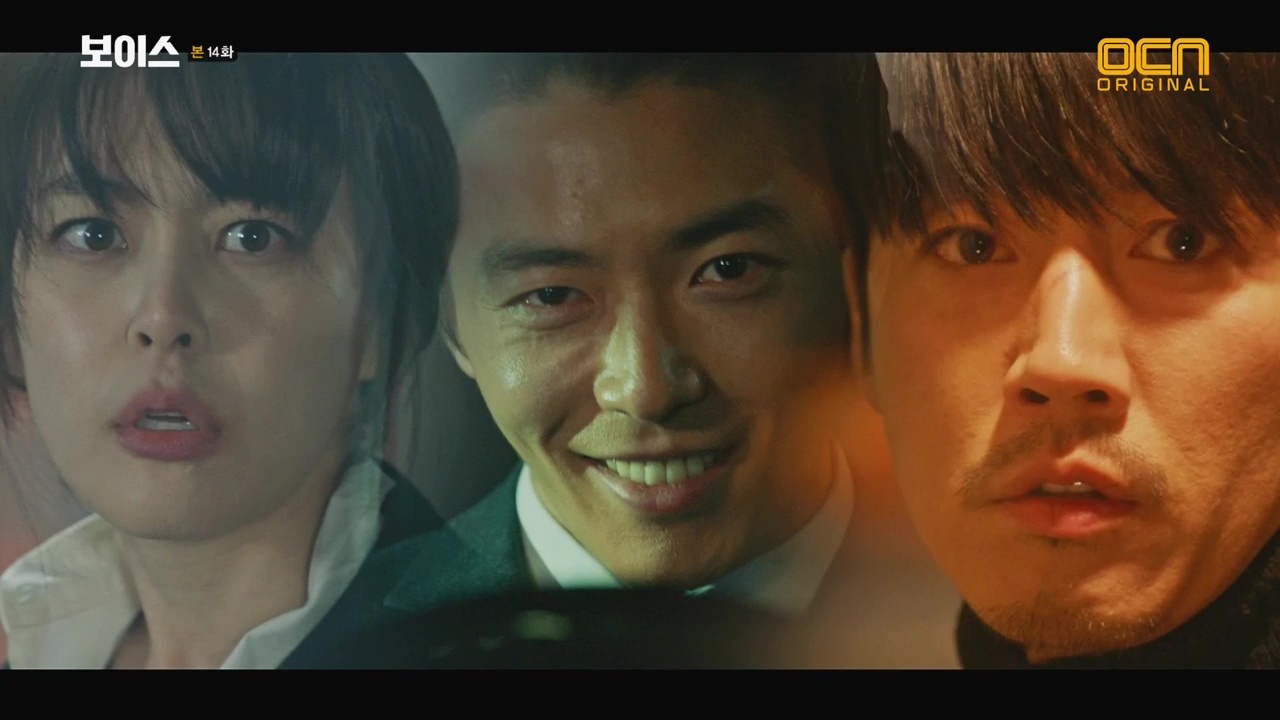 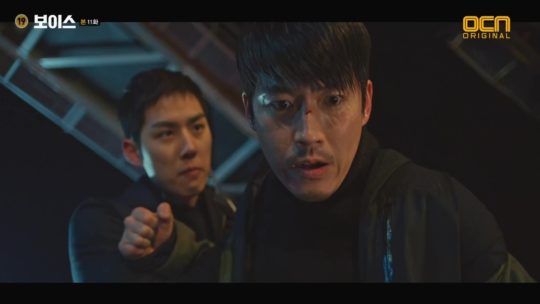 Detective Moo Jin Hyuk (Jang Hyuk), a man with dogged persistence, and policewoman Kang Kwon Joo (Lee Ha Na), a woman with extraordinary hearing, are brought together by the cold-blooded murders of their loved ones. After Kwon Joo studies voice profiling in the U.S. an Jin Hyuk drowns his sorrows in anger, the two are brought together in mutual pursuit of the brutal murderer who has escaped into anonymity. A first-response unit called the “Golden Time Team” is created to ensure the rescue of victims within the critical “golden time,” after which it is less likely that they can be helped. Joined by computer hacker Oh Hyun Ho (Yesung) and multilinguist Park Eun Soo (Son Eun Seo), the Golden Time Team takes on time-critical cases that require the expertise of each team member. But behind many of the crimes the team takes on is an organization that hides the identity of the serial killer. “Voice” follows the exciting journey of Jin Hyuk and Kwon Joo as they pursue justice and personal resolution.

And it does get very exciting. Many of the cases are fast-paced, the action hot, and at the crux of each is a story that tugs at the heart strings. The cases received much more development and screen time than character development, making “Voice” a plot-driven drama. 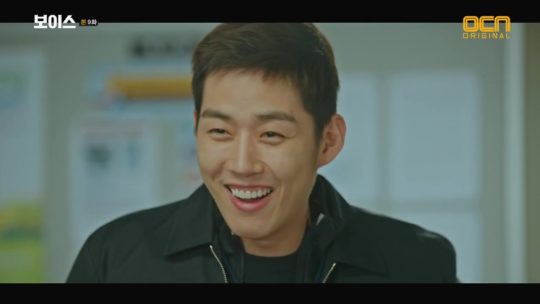 Each case tackles important, difficult issues found in society: human trafficking, violence, bribery, organ harvesting. The show highlights these issues and builds up the characters as they learn to work together. We see how Jin Hyuk is impulsive and persistent, but also very intuitive and intelligent. A flawed, but essentially good hero. Kwon Joo isn’t just a woman with super hearing, she’s very educated in criminal and victim behavior — a heroine with much to learn. Violence is integral, but not overly gruesome. Special moments of bonding take place between Kwon Joo, Jin Hyuk, and the people they help. As they search for the serial killer who changed their lives, they are also changing the lives of others. “Voice” really honors the work of law enforcement and highlights how important dedication and knowledge is. It occasionally gets a bit preachy, but nothing too bad.

The second half of the series delves into the central conflict, that with the serial killer, and the pace begins to quicken. The villain’s insanity is an impetus for many things and keeps us on our toes. This was my favorite part of the drama, when the Golden Time team finally started to trust and rely on each other. 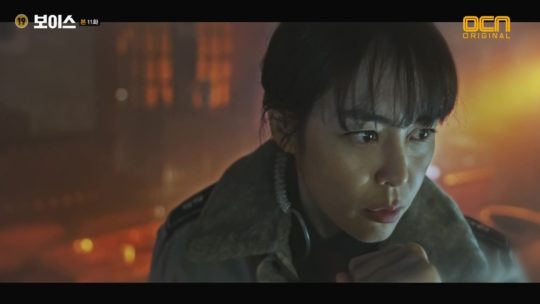 “Voice” is aptly named for the sound of the voice that haunts Kwon Joo. The voice is that of the killer who took the life of Jin Hyuk’s wife and her own father. Over the years she hasn’t been able to forget it, and it has inspired her to train her hearing and learn about the psyches of dangerous and mentally ill people. Her hearing is so acute that it keeps her awake at night. It shapes and defines her. Before she found a place on the Golden Time team it made her feel outcast. But she found a way to use it to help people and to solve the mystery of her father’s murder. Superhuman hearing may be what physically makes her special, but it is her determination to help people and help herself that truly makes her a special heroine.

I do wish that we had seen more of the effects of her hearing on her daily life, not just in her work. It’s such an interesting super strength and its combination with her profiling made her a unique character. 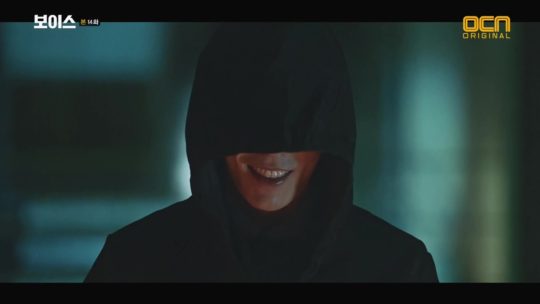 So much can be said without a word, and “Voice” does just that. Kwon Joo’s keen hearing is visually depicted by close shots and blurred photography. Tae Goo’s (Kim Jae Wook’s) mental state is mirrored by the camera’s close ups of certain parts of his face — a wicked grin or a smiling eye. Jin Hyuk’s fighting skill is shown with cleanly cut shots and his telltale fast fists. The lighting in darker scenes is still clear enough to see the action of the shot without having to squint, a perpetual problem of darker-themed dramas.

Some of the camera work was shaky and I’m not sure if that was to establish mood or if it was because it was a handheld camera. For the most part, the technical aspects were not distracting. In fact, they made the show even creepier, which is the perfect mood for this thriller. 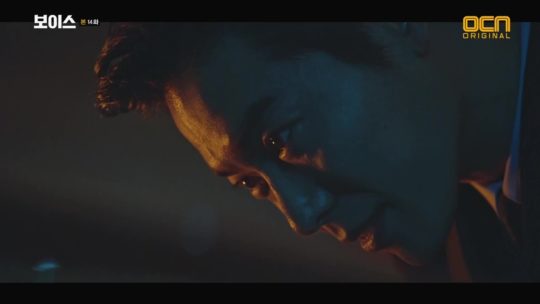 The entire cast is stellar, but these two gentleman are a step apart. Jang Hyuk is known for his intensity and physical acting. His Jin Hyuk is full of wretched misery and determination. The devotion he displays to his son, his deceased wife, his revenge, and his cases is unparalleled. And Kim Jae Wook is a terrifying villain, playing the insane killer with a twisted, dark sense of humor and a chilling thirst for blood. Some of the strongest moments of the drama are when his character, Mo Tae Goo, displays his duplicitous and very dangerous nature.

With guests, villains, handsome leads, and citizens in distress, “Voice” is huge in scope. The main leads, Jin Hyuk and Kwon Joo, were the focus, but each case brings us characters we learn to love or hate in a short period of time. One week focused on a very misunderstood granny and her tragic circumstances while another on a bus driver who wanted to do right by his passengers but was manipulated by his boss. The Golden Time team touches the lives of these people and they meddle in the affairs of the corrupt officials who endeavor to fill their pockets rather than do right by their citizens.

As for the leads, Kwon Joo is fiercely determined to use her hearing and methodical planning to help others, although mild-mannered. Jin Hyuk is her opposite, with a fire-cracker temper and a tendency to act before he thinks. They are both good complements and foils for each other. I would’ve loved a little more intimacy in their working relationship. Not romance, but true intimacy, which could’ve been gotten through a few more shared meals or quiet seaside chats. 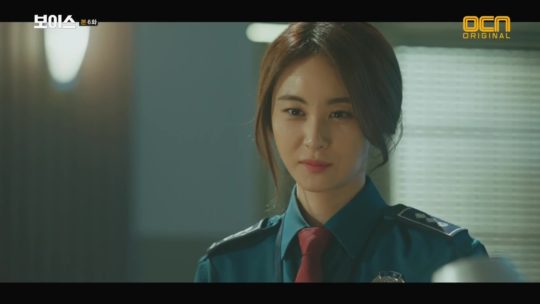 Although “Voice” could’ve been more smoothly filmed and developed the leads more, it was quite an exciting show, especially after Kim Jae Wook made his entrance. I wanted more interaction by the Golden Team members outside of work so we could see them grow close and get to know what makes them tick. That time was spent on the various cases of the week, which is where this drama’s strengths lie.

Raine0211 is a lover of all things Korean, especially K-pop, K-drama, and Korean food. When she’s not writing for Soompi, she’s playing the cello and singing. She happily indulges in all kinds of K-pop, but her biases are SHINee, INFINITE, and VIXX. She lives with her sister, her roommate Elsa, and her two cats, Timmy and Momo, all of whom also love K-pop and K-drama.