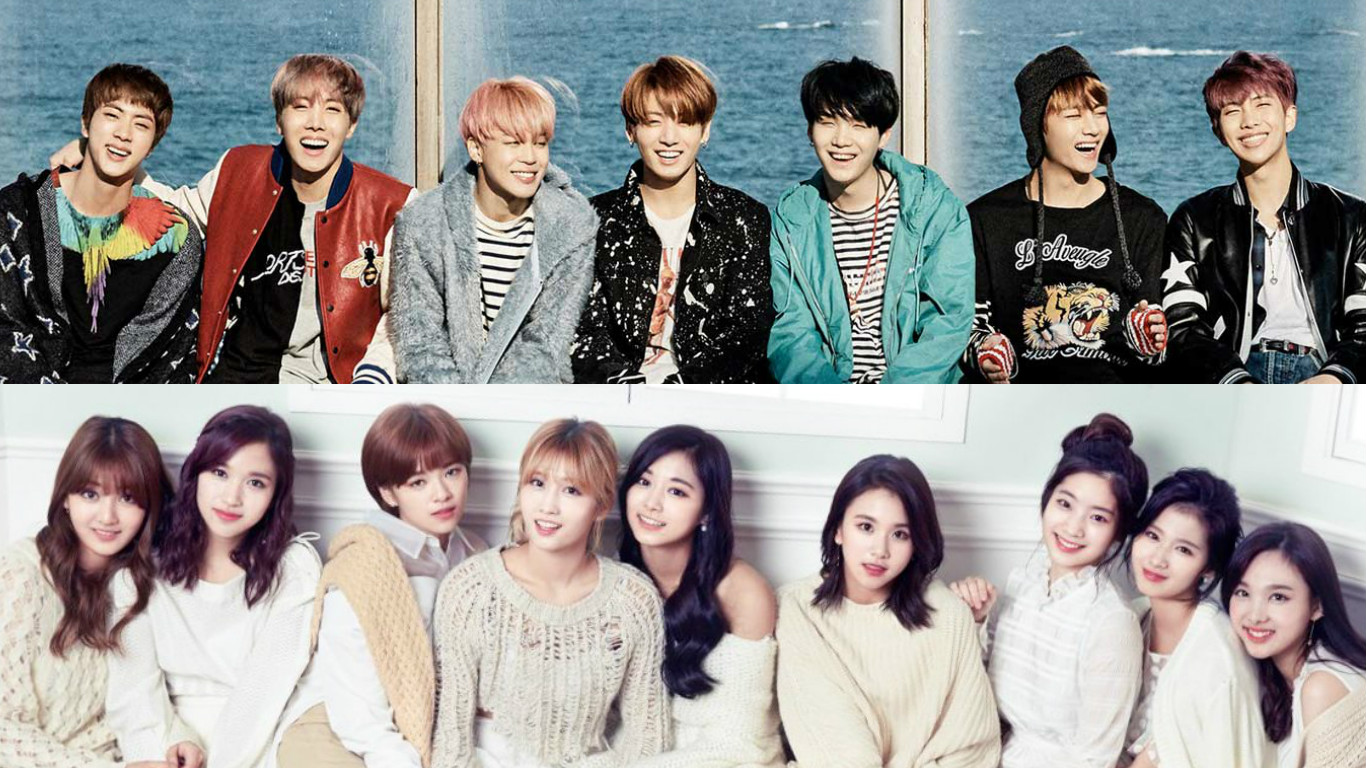 The K-pop syndrome is still considered a global issue. News about idols in Korea is spread through K-pop fan sites in real time. No one thinks of K-pop as a one hit wonder anymore. It is no longer difficult to find the names of idol groups on the US Billboard Charts or on charts in the United Kingdom. K-pop is now appreciated in countries like China, U.S., Brazil, Canada, Finland, Hong Kong, New Zealand, Singapore, Norway, and Taiwan.

So Sports Chosun asked the question: which male and female idol groups are the most influential in today’s K-pop scene? 20 K-pop agencies that take center stage both domestically and overseas were surveyed, and the top groups were BTS and TWICE. The two groups received 18 (BTS) and 17 (TWICE) of the 20 available votes, showing that most of the agencies agreed with the assessment.

There weren’t many who disagreed with the opinion that the two teams are at the top of their game. BTS has a huge global fandom that has helped them in being recognized in major pop markets in the U.S. and the U.K., and TWICE is accredited with bringing a new generational wave of girl groups, following the footsteps of other popular girl groups like Girls’ Generation and Wonder Girls. These two teams are also the ones who took home many of the album and online music awards last year. 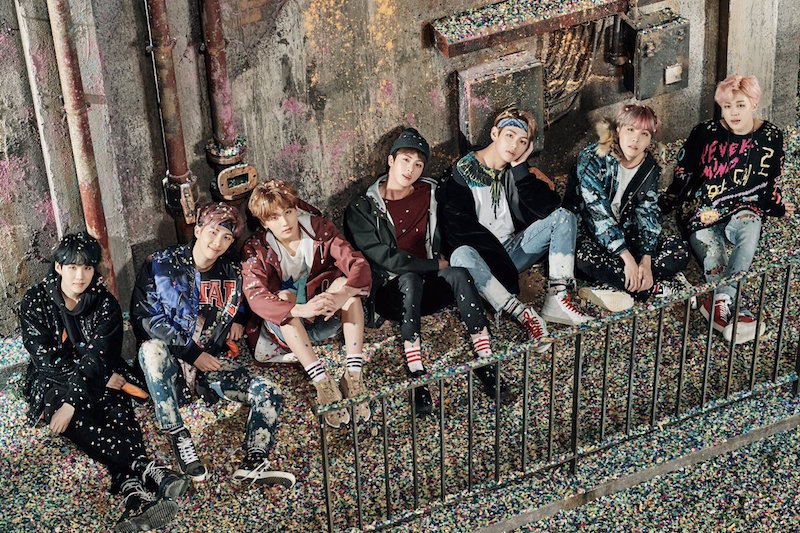 BTS “Communicating with their fans”

BTS now calls the world their stage. They have made their mark on the US Billboard Charts four times, and even gotten listed on the U.K.’s main charts, which are quite conservative in nature. They’ve topped the iTunes Chart in 23 countries. These are the achievements of a global group that goes beyond the “K-pop craze.”

Surveyed representatives in the Korean music industry chose BTS’ strong content planning was the reason for their success. One agency CEO stated, “In the male idol market, a group’s fandom size determines the success or failure of that group. BTS has been creating tailor-made contents, from the initial planning process to what kind of fans to target. When you look at their contents, you can’t not acknowledge why they are on top.”

A big contributing factor to their success is continuously creating content that their fans want and can enjoy. Another representative stated, “Knowing how to provide the activities and sights that fans can enjoy and go wild for is a determining factor in growing a strong fandom. BTS has been consistently communicating with their fans and creating fitting content.”

Despite the difference in Eastern and Western cultures, BTS was able to find a common ground in tapping into critical views that many people share. The topics of youth and growing pains, and being critical of society’s views of what is “different” are ones that transcend cultural difference. Since making their debut in 2013, BTS has been telling a story of the growing pains of youths with their three-part school series and their two-part youth series. This was a reason for how BTS was able to connect with fans in the Western hemisphere. With topics like school and youth, things all young people can relate to, and incorporating a storytelling element to their album concepts was a driving factor for the group’s growing popularity. They are a prime case of successful planning, with hints in each album that are open to interpretation, and shows the importance of content creation.

BTS has landed a total of four consecutive albums on the US Billboard “Billboard 200” Charts.

This is meaningful as BTS was able to achieve this without actively promoting in the U.S., while many singers have set up shop inside the country to achieve similar results. The reason they were able to captivate fans from across the globe was with their strong content. The power of word of mouth through social media is strong. BTS’s chart success, driven by their wide variety of contents like music, videos, and live performances, is said to have shown a new growth possibility for the Korea music industry. Well-planned content spread through platforms like YouTube to create a strong global fandom.

While BTS receives support from their global fandom, TWICE has risen to the top girl group status in Korea in a short amount of time. In a little over a year since their debut, TWICE had announced their status as the “nation’s girl group,” successfully selling over 200,000 albums and getting over 100 million views on YouTube. TWICE’s success is said to have marked the growth of fourth-generation girl groups. Entering their third year after making their debut in 2015, TWICE now stands as the leader of a generational shift in K-pop.

Representatives who voted for TWICE said their main reasons for choosing the group were, “Great songs,” and “Great personalities.”

One agency CEO stated, “TWICE, the head of the new generational shift in girl groups, gained attention by choosing their team members through an audition reality program, and have been receiving much love and attention from the general public for the easy-to-follow songs and performance.” They also added, “They’ve opened the doors for a new generation of idol groups with their various concepts, ranging to cute to girl crush to sporty, and their adorable style and lyrics.

Another representative pointed out how TWICE has released four consecutive title tracks that were extremely successful hits. They stated, “Having a harmonious group of members from various countries, with each member having a unique personality that brings new fans in, has helped them create a strong fanbase. They’re even doing quite well in album sales, a category that girl groups are usually weak in. Another reason for their popularity is that their songs are easy to follow and are relatable.”

Though girl groups are usually considered to be weak in album sales, TWICE was the exception. Their third mini-album “TWICEcoaster: LANE 1” had sold over 200,000 copies in its first month, making the group stand out amongst their peers, especially when considering the fact that a girl group’s album sales are considered good when they sell around 30,000 to 40,000 copies. Not only was TWICE the girl group with the most albums sold in 2016, but even when considering boy bands, the only groups to out-sell TWICE were EXO and BTS.

Even the view counts on their music videos are exceptional. The music video of “CHEER UP” hit 100 million views in 207 days, breaking the record for the fastest K-pop idol video to reach the milestone. In an impressive feat, the videos for their debut track “Like OOH-AHH,” as well as “TT,” have also reached the 100 million views club.

TWICE has made their mark as the girl group to beat with four consecutive hits under their belt. From “Like OOH-AHH” to “CHEER UP,” “TT,” and “KNOCK KNOCK,” TWICE has definitely earned the title of the top girl group of Korea.

Do you agree with these assessments? Share your thoughts with us!