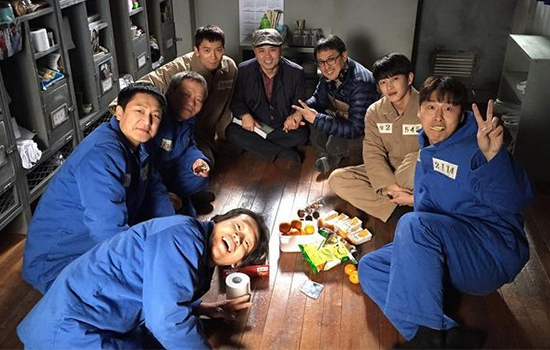 Imagine if you were lucky enough to see this sight!

Kim Min Suk previously promised that if “Defendant” received over 25 percent in viewership ratings nationwide, then he would walk the the streets of Seoul for 10 hours dressed in his prison outfit. Just last week, “Defendant” surpassed this milestone with its 15th episode marking 25.6 percent according to Nielson Korea.

While he didn’t actually end up walking 10 hours, understandably, Kim Min Suk did honor his original intent by walking around the Hongdae area of Seoul along with a few of his fellow “prison mates,” all dressed for the part. While it was originally supposed to take place in Gangnam District, it was subsequently changed for safety reasons.

Following the event, the young actor posted a short video on Instagram not only to inform everyone that they wrapped up the event, but also to thank viewers as the March 21 broadcast of “Defendant” was its last episode.

Kim Min Suk also thanked his acting seniors for completing the difficult task with him, although it was something he had just said on the spot, as well as reporter Jo Eun Jung, who had interviewed the actors for a future broadcast of “Night of Real Entertainment.”

Kim Min Seok
Defendant
How does this article make you feel?