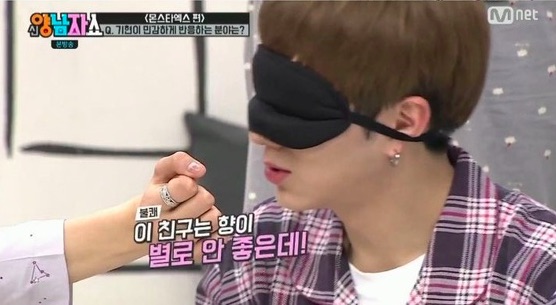 MONSTA X’s Kihyun proved himself to have an amazing sense of smell on the March 23 episode of Mnet’s “New Yang Nam Show.”

The members singled him out as the member who is the most sensitive to different scents, and Kihyun admitted, “I really am sensitive to smells. I react a lot to a passerby’s perfume, and I can’t eat foods with strong smells.”

Afterwards, Kihyun was put to the impossible task of identifying the members of MONSTA X by smell alone. Shockingly, he is able to identify all the members by smelling their wrists or necks.

Kihyun also showed off his funny side as Minhyuk held out his wrist for him to smell, saying, “This guy smells bad.”