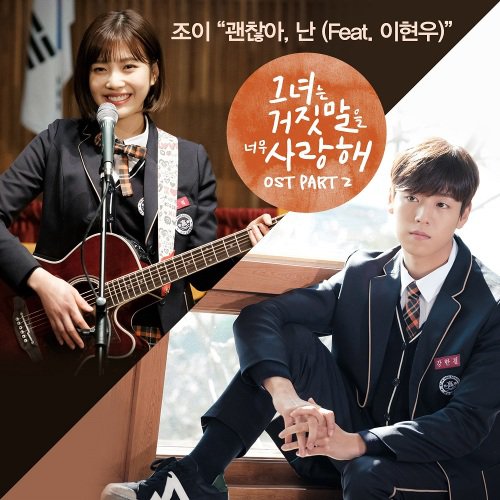 Red Velvet’s Joy will be releasing her second OST for “The Liar and His Lover,” the drama she currently stars in. The song, “I’m Okay (Feat. Lee Hyun Woo)” (literal title) will be released at 6 p.m. KST on March 27.

Joy also sang the first OST for the drama called “Yeowooya,” and her sweet and lovely voice is set to get the hearts of listeners racing again.

This upcoming song is also set to feature a rap verse from Lee Hyun Woo to build up a sweet story between their two characters. Considering the fact that Lee Hyun Woo has released a hip hop collaboration album before, it will be interesting to see what he brings to the new song.

As “I’m Okay” plays a pivotal role in helping the love story play out, the director, screenwriter, and music director all worked together to make the song shine.

The song was written by Hwang Sang Jun, the drama’s music director, while screenwriter Kim Kyung Min wrote the lyrics. Shin Hyung, the composer of IU’s “Because I’m a Girl” and considered the greatest music arranger of today, has teamed up with MONSTER NO.9, who co-composed Im Chang Jung’s “Love Again,” to create a unique and complete song.

The sweet romance between Kang Han Kyul and Yoon So Rim plays out on tvN’s “The Liar and His Lover” every Monday and Tuesday at 11 p.m., and Joy’s “I’m Okay (Feat. Lee Hyun Woo)” will be released on March 27 at 6 p.m. KST.

Are you excited to hear Joy’s new song?