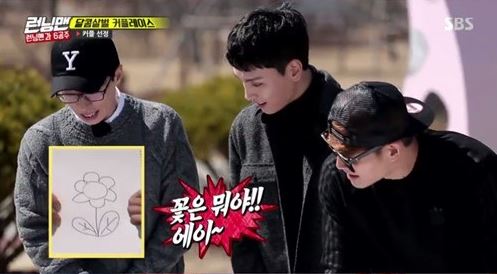 From the moment he showed himself, he confessed, “I came here to be paired with Song Ji Hyo. I really want to become a couple with her.”

To decide the couples, the female cast drew self-portraits for ten seconds, and the male cast had to choose the picture of the person he wanted to pair with. Song Ji Hyo drew a flower instead of her face, and Choi Tae Joon was somehow able to figure out that the picture was hers. He selected the flower, and they became a couple.

Choi Tae Joon sweetly told Song Ji Hyo, “This flower isn’t as beautiful as you are.”

Watch the previous episode of “Running Man” below!