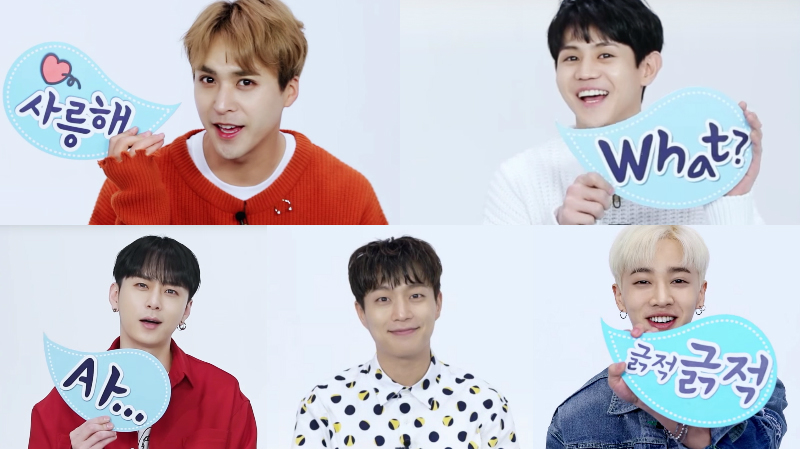 Watch: Highlight Answers Fan Questions On “Ask In A Box”

Highlight is the latest group to make a guest appearance on 1theK’s “Ask In A Box,” a segment where idol groups appear to reveal things about themselves that fans are curious about.

When asked who he would save first if all the members were on a sinking ship, Yoon Doo Joon answered Junhyung because he was the only member who couldn’t swim. Junhyung then said he would steal Yoon Doo Joon’s lifejacket to save the other members. Yoon Doo Joon asked, “Then what am I supposed to do?,” to which Junhyung humorously replied, “There’s nothing that can be done about that.”

Fans asked Yoseob if he steal wears elaborate underwear on days when he has important events or performances, as the singer has been known to do this since his debut. Yoon Doo Joon prodded Yoseob to show viewers to which Yoseob replied, “No, I can’t. That would be discourteous to them,” and proceeded to check what he wore that day. Yoseob showed his fellow members what he wore and they all expressed their awe at his flashy underwear.

Another fan asked Dongwoon if he ever wants to talk casually to his fellow members, who are all older than him. Although the question as directed at Dongwoon, the other members jump in and said, “Even though he speaks formally, his actions don’t match that at all.” Lee Gi Kwang demonstrates how Dongwoon casually pushes the members to the side whenever they’re in his way; however, Yoon Doo Joon clarifies that they are teasing Dongwoon and expresses that Dongwoon is a kind person.

Watch the rest of the latest episode of “Ask In A Box” featuring Highlight below!

Ask in a Box
Highlight
How does this article make you feel?