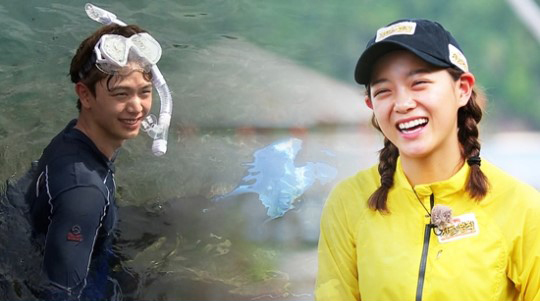 In the upcoming episode of “Law of the Jungle,” gugudan’s Kim Sejeong, BTOB’s Yook Sungjae, and Kim Byung Man attempt to hunt for food in the sea.

Yook Sungjae expresses his concerns about his first time sea hunting and admits, “I don’t even swim that well in normal circumstances. This is my first time even putting on swim fins.”

The waters in Sumatra prove to be difficult to navigate, as the current is strong and visibility becomes increasingly limited as the three swim deeper.

Yook Sungjae, who was swimming with a buoy, loses his sense of direction and drifts further and further away from Kim Sejeong and Kim Byung Man, putting himself in danger.

Luckily, Yook Sungjae is saved by Kim Sejeong, who pulls him to safety. Later, he explains, “The current kept pulling me in a different direction and I couldn’t think straight because of it. It was then that Sejeong grabbed ahold of me and swam to safety.”

He praises Kim Sejeong and says, “Her survival skills are strong and I think she’s really impressive. I feel like I really understand now why she’s called ‘God-Sejeong.’”

Kim Sejeong also reveals that she was actually bad at swimming, which surprises everyone. She explains that, in the midst of her busy schedule, she went and learned how to swim for “Law of the Jungle,” exemplifying her strong sense of responsibility and maturity.

Meanwhile, Yook Sungjae and Kim Sejeong bonded in a previous episode as fellow idols and Yook Sungjae reveals an interesting pastime that he believes is helping him on the show.

Law of the Jungle
Yook Sungjae
Kim Sejeong
How does this article make you feel?