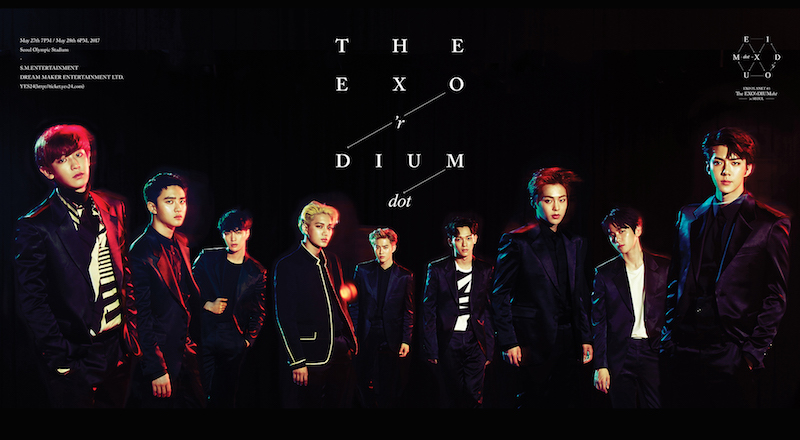 EXO will be ending their latest concert series with a huge bang!

The group recently announced that they will be holding the finale to their third concert tour, “EXO PLANET #3 – The EXO’rDIUM [dot],” on May 27 and 28 at the Seoul Olympic Stadium located in Jamsil neighborhood of the city.

This main stadium of Jamsil Olympic Park holds a maximum capacity of 100,000 people, and has featured concerts of famous foreign artists such as Stevie Wonder, Elton John, Metallica, Michael Jackson, and Lady Gaga.

EXO will be joining a small list of big name domestic artists, such as Seo Taji and Boys, SECHKIES, god, who have held a concert at this stadium, a feat that is often regarded as difficult to achieve because an enormous fanbase is necessary. With one of the largest fandoms and their widespread influence, EXO will be following in the footsteps of their seniors.

Fans of the group are no strangers to “blood ticketing,” as EXO concerts tickets sell out within seconds of opening. These latest upcoming encore concerts are reportedly set to hold an audience of around 80,000 people, and many are predicting that EXO will sell out once more.

Since their debut in 2012, EXO has made large strides and have set record after record with every solo concert. Back in July 2016, they were the first artist to ever hold six days of the same concert at the Gymnastics Arena of Jamsil Olympic Park, and were also the first to perform at Korea’s very first “dome” stadium, Gocheok Dome, back in 2015 with their “EXO-Love Concert in Dome.”

The group also recently marked their 100th solo concert on December 11, 2016, during the Osaka stop of their Japanese dome tour.

Meanwhile, EXO’s next stop on this tour, “”EXO PLANET #3 – The EXO’rDIUM” will be in Singapore on April 2, before the group heads over to North America for their final three stops before the encore, beginning April 25.