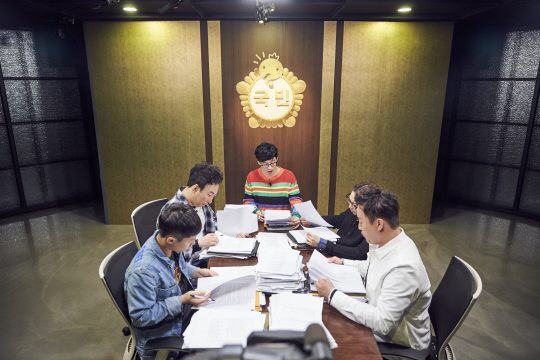 MBC’s “Infinite Challenge,” which recently underwent a seven-week break and reorganization, will be holding a national assembly special. The plan is for 200 civilian representatives and five different assemblymen and women — one from each of the five parties in the Assembly — to discuss various issues such as jobs or housing.

The show gathered viewer opinions from December 2016 through March 2017 on their hopes for Korea as well as how they think Korea can improve. Producing director Kim Tae Ho said in an interview, “We sent the responses from the public to the National Assembly, and after choosing the ‘ideas that do not already exist, but have potential,’ we will discuss those on the show.”

However, ahead of the April 1 broadcast of the special, controversy arose when the five Assembly members to appear on the show were revealed. Specifically, the issue was the inclusion of assemblywoman Kim Hyun Ah from the Liberty Korea Party (LKP), as her stance is more in line with the Bareun Party despite the fact that she is representing LKP.

The legal representative for LKP, Jung Joon Gil, said on March 30, “The casting for the show is inappropriate, and deviates from principles and equity,” and revealed that he filed for a broadcast injunction against “Infinite Challenge.”

Previously, on March 28, Jung Joon Gil had said, “Assemblywoman Kim Hyun Ah has often affiliated herself with the Bareun Party, attending their party formation events and even emceeing official events [for the Bareun Party]. There are two de facto representatives for the Bareun Party [on ‘Infinite Challenge’] and none for the Liberty Korea Party, which is a direct contradiction of fairness.”

March 30, “Infinite Challenge” said in response, “When you see ‘Infinite Challenge’ this week, you’ll think that the concerns you’re having now were premature. Rather than cause for concern, the show will be a good opportunity to hear what people have to say.” Moreover, according to reports, “Infinite Challenge,” rather than choosing a member from each party, chose Assembly members based on their areas of expertise, in order to better discuss the various issues that will be raised during the show.