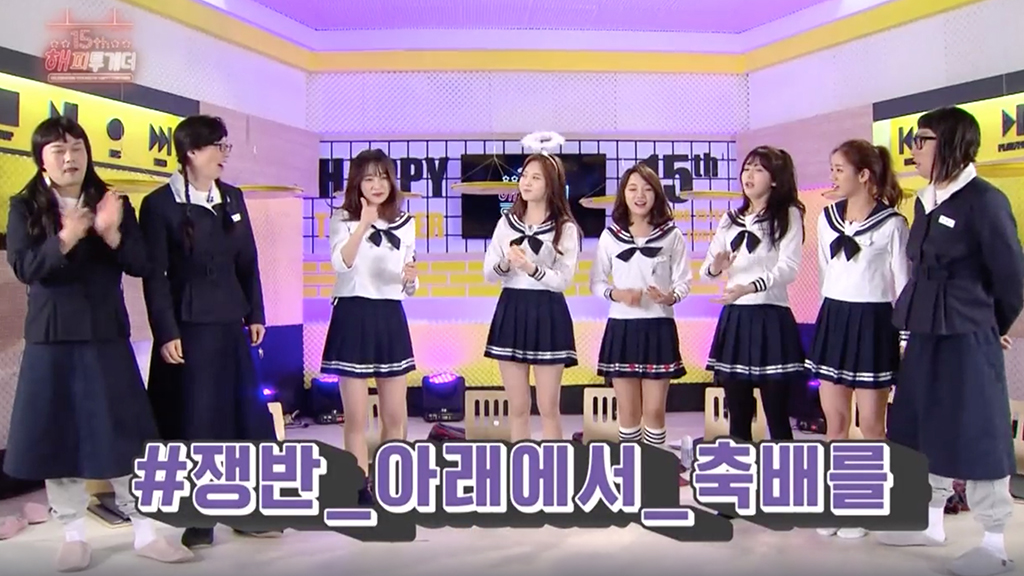 On the March 30 broadcast of KBS2’s “Happy Together,” Girl’s Day Hyeri, Yura, EXID’s Hani, gugudan’s Sejeong, and Jeon Somi opened up about their love lives and crushes from their schooling years.

Hani confessed, “When I was in fourth grade, I liked a boy who trained for a triathlon with me. I actually once got hit by a soccer ball he kicked but he told me he would take care of me because of that incident,” relaying a funny but sweet anecdote about her first crush.

She continued, “We keep in touch even now. He’s currently a member of Korea’s national triathlon team and won a medal at the Asian Games,” and revealed that her first crush was triathlete Heo Min Ho.

The MCs asked, “So does he still say now that he’ll take care of you?” to which Hani replied, “We don’t have deep conversations like that,” which caused laughter on set.

Hyeri admitted that there was a boy she realized she liked when she was in middle school; however, unlike Hani’s crush, which remained a one-sided love, Hyeri confidently stated that she dated her crush, throwing everyone off-guard.

The story about Hyeri’s middle school crush took a turn for the dramatic when she said, “My boyfriend at the time went to a different middle school but there was a boy from my own school who liked me and he tried to start a fight with my boyfriend.” MC Yoo Jae Suk then attempted to hijack Hyeri’s story and said, “So the entire school got involved in the fight…,” which Hyeri vehemently denied while laughing.

The singer confessed that they ended up breaking up after she debuted. Hyeri said, “I was living in the dorms at the time with the rest of my members and our manager but I still somehow had to meet my boyfriend, despite the fact that we weren’t allowed to leave without permission. We broke up because I couldn’t meet him often enough.”

When asked how she managed to sneak out, Yura jumped in and said, “All you have to do is grab the bell when you open the door so it doesn’t make a sound,” to which MC Yoo Jae Suk said, “Wow, you’ve done everything,” causing the two Girl’s Day members to laugh.

Meanwhile, “Happy Together” is currently celebrating 15 years on air with a series of special episodes in which the show brings back popular corner from previous seasons. Watch the latest episode of “Happy Together” below on Viki!