Kim Min Suk has hit three consecutive home runs with “Descendants of the Sun,” “Doctors,” and “Defendant,” and he emphasized that he values and cherishes every person he has met along the way.

In an interview to commemorate the end of his recent production, “Defendant,” the actor explained, “I’ve only been in this industry for five to six years, and I always find myself lost in the projects I do, even after they’re over. When I finished filming ‘Descendants of the Sun,’ I thought I would be lost in that project forever.”

He talked about recently going to the event commemorating the first anniversary of “Descendants of the Sun” and lamented about how hard it was for everyone to meet up because of conflicting schedules. He also added, “My eyes immediately teared up when I saw Jin Goo. He came over to me and comforted me by saying ‘Baby bird, why are you crying?'” 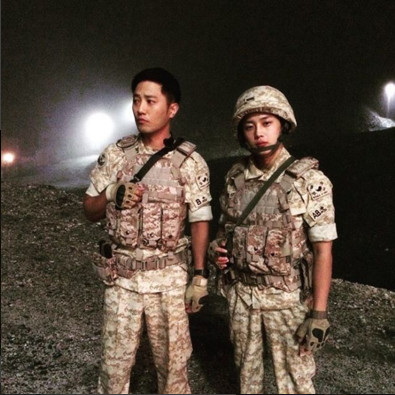 Kim Min Suk had great things to say about the co-stars from his past three productions, stating, “In ‘Descendants of the Sun,’ I played a role that was very energetic, so Song Joong Ki and Jin Goo would tell me that they’d work off of anything that I wanted to do. In ‘Doctors,’ Kim Rae Won and I talked a lot about how we could make each scene more fun and engaging. For ‘Defendant,’ I played a very dark role for the first time, and I think it went well because I got to share ideas with Ji Sung.”

Some may not know this, but Kim Min Suk actually made his debut through “Superstar K.” However, he explained that he later realized that though he likes to sing, he doesn’t like to sing in front of crowds. He also added that he found acting to be like a breath of fresh air, and discovered that his true calling was being an actor rather than a singer.

He has also appeared in variety shows like “Law of the Jungle” and “SNL Korea,” but he confessed that they never really go his way. Kim Min Suk stated, “I had the most fun on MBC’s ‘King of Masked Singer,’ but I feel a lot of pressure whenever I’m on a variety show. I want to play out the role that I’m given, but it’s never as fun or as good as I want it to be.”

Finally, Kim Min Suk was asked whether he would like to star in a romantic comedy. The actor said, “I’m not sure if you could find an actress who would want to be my partner. Romantic comedies require actors to be able to melt women’s hearts with a single gaze, but I don’t think I’d be good at that.”

He then laughed and added, “But if I’m lucky to find an actress to work with, I will wait on her hand and foot.”

Kim Min Seok
How does this article make you feel?