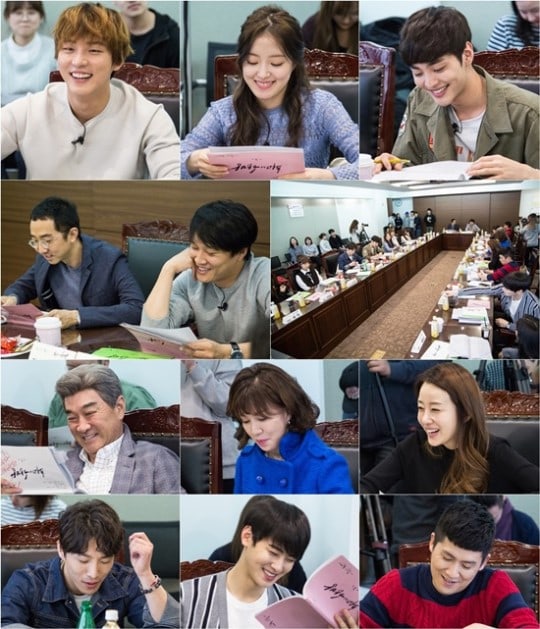 The drama also stars Yoon Shi Yoon and Kim Min Jae in a slice-of-life story about youths in their 20’s struggling to figure out their lives. The drama is said to be a new genre called “variety drama.” Monster Union’s PD Seo Soo Min, who produced “Producer,” and Green Snake Media will be participating in this project.

Ahead of the read-through, Yoo Ho Jin and Cha Tae Hyun greeted the cast and production staff. “I hope this will become a place where we make each other stronger,” Yoo Ho Jin said. “I am lacking in a lot of places but I will work hard. I hope that this will become a light-hearted and fun drama.”

Cha Tae Hyun added, “I’ll be satisfied as long as we have fun doing it. I would like for us to suddenly get a good result after nobody expects anything from us.”

Yoon Shi Yoon, who plays Yoo Hyun Jae, said, “I feel like I have a lot of weight on my shoulders. I want to prepare as hard as I can so that I can feel more comfortable when it’s time to act on set. Acting is acting, but I will work hard on matching well with others.”

Kim Min Jae, who plays Lee Ji Hoon, said, “It’s an honor to be able to work with such great seniors. I will work really hard and show a good side of myself.”

Lee Deok Hwa said, who plays Lee Soon Tae, said, “It’s nice to work with so many young people. I will work hard so that we can get the greatest cut. I’ve prepared about three wigs but I think I have to prepare more. Let’s have fun!”

A source from Monster Union stated, “At the script reading, all the actors brought their passion, talent, and chemistry to the table. We felt reassured that this would be a fun drama going forward. We hope that many people will be interested in the unique characters and unpredictable stories from the variety drama ‘Greatest One-Shot.'”

The variety drama will air sometime near the end of May or beginning of June.