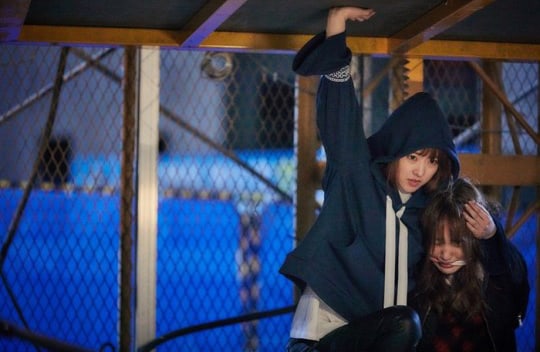 With only four episodes left, viewers of JTBC’s “Strong Woman Do Bong Soon” were left hanging after the events of the most recent episode.

In new stills released by JTBC from the upcoming episode, viewers can see Do Bong Soon using her superhuman strength to hold up a descending freight lift while protectively holding her other hand over her best friend.

In the other still, however, viewers can see Do Bong Soon being held at gunpoint. Although she seems to be blocking the gun, her facial expression conveys a sense of unwelcome surprise, which is causing viewers to wonder what is happening in the scene.

As the criminal still has yet to be caught by the police, viewers are looking forward to the last four episodes, as the drama wraps up the various narrative arcs that they’ve introduced over the past few weeks.

Meanwhile, actress Park Bo Young talked about the perks of filming “Strong Woman Do Bong Soon” and actor Park Hyung Sik may be lending his voice to a new OST for the drama.