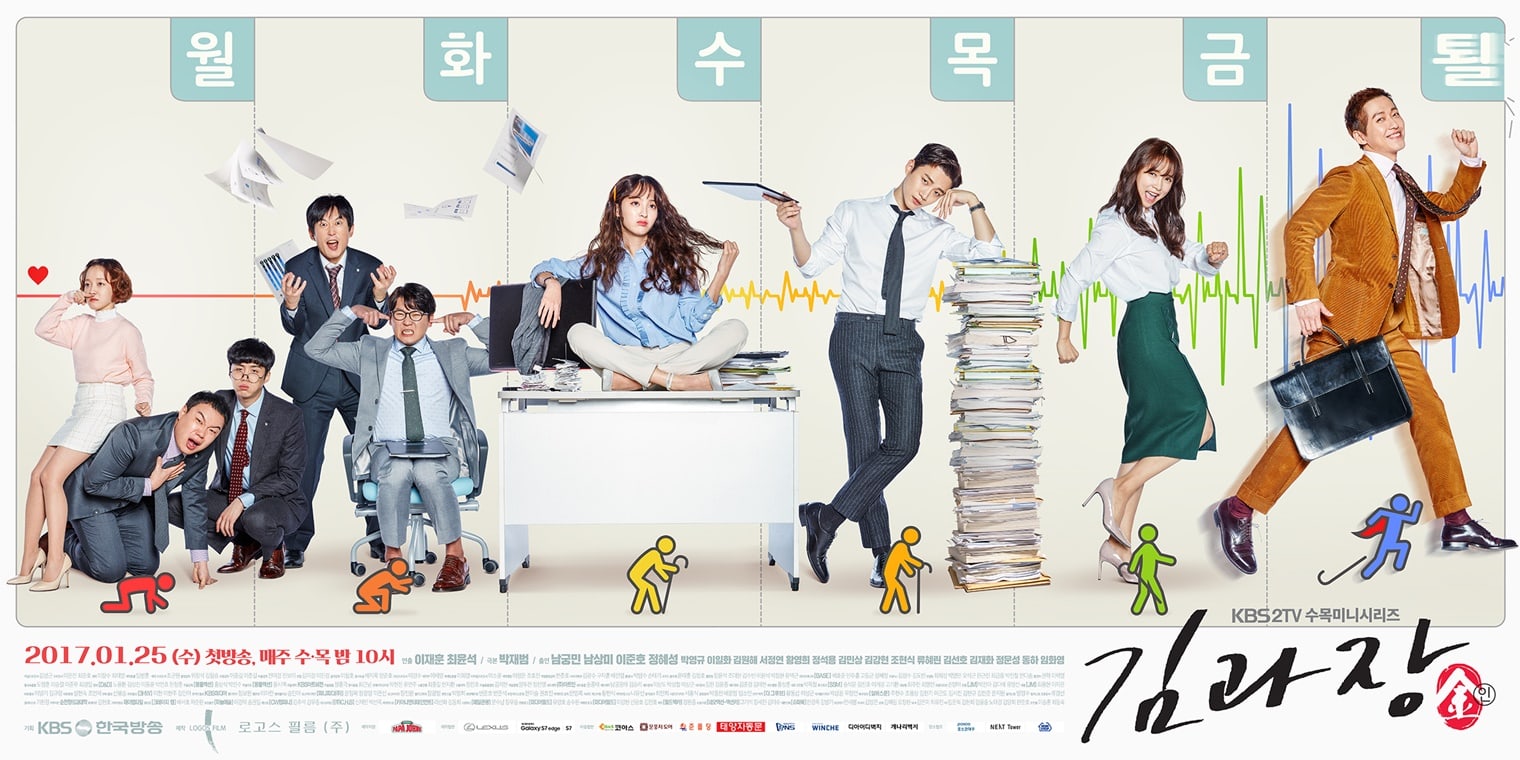 While we must say goodbye to KBS2’s “Chief Kim,” we can certainly hold on to the laughs this topsy-turvy drama gave us. “Chief Kim” closes with 20 episodes and reassures us that an office drama without a major romance can still draw in an impressive viewership. 2PM’s Junho has gained more attention and praise for his acting, and Namgoong Min could possibly start his own business fashion brand (I’ll touch on this a little later). “Chief Kim” is a great drama recommendation for lovers of humor and office shenanigans.

“Chief Kim” is centered around its titular character, an accounting expert played by Namgoong Min who helps gangsters commit fraud and get away with it. He decides to move up to the next level by joining a large company in the hopes of adjusting a few numbers and pocketing some of their money. However, the heads at his new company, TQ, have very different plans for Kim Sung Ryong (Namgoong Min’s character). Turns out the corrupt leaders of TQ Company are well aware of his past and hope to use his skills for their own benefit, especially the company’s new director, Seo Yool (played by 2PM’s Junho). After Chief Kim finds himself involved in a few incidents that reveal the alarming extent of the corruption within the company, he experiences a change of heart and fights to save the company from itself. 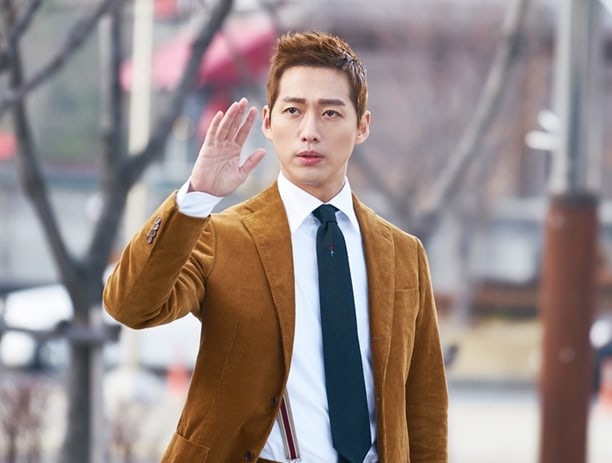 While a drama that deals with corporate corruption isn’t at all original, the execution and comedy (which sometimes banks on the absurd and melodramatic) kept the show different enough that it stands well on its own. The stakes were also raised accordingly as Chief Kim took on various levels of leadership, from his own department all the way to the chairman.

Aspects of some of the crises the characters faced were mostly unbelievable. Why any company would think it was worth trying to control Chief Kim is beyond me. However, that isn’t to say the story is unbalanced. There were plenty of moments where characters reacted to events realistically. For example, Chief Kim gets kidnapped and hauled to a warehouse where men attempt to hang him. Minutes later he was bickering with another character and getting left on the side of road in humorous fashion. I only felt pulled back to reality when Chief Kim arrived home and conveyed his fears and cried while being comforted by a friend.

The drama felt like a constant “push and pull” between outrageous scenes and more down-to-earth scenes. I had to keep a pretty open mind during most episodes. So would I make the assumption most of the things in this drama could happen in real life? No. Does this very absurdity drive the show? Yes.

I used the word “absurdity,” and it applies perfectly to the main character, Chief Kim. His crazy antics drive a lot of the drama and it was enjoyable to wonder how he would react in each situation. You constantly ask the question: what crazy thing is this guy going to do next? 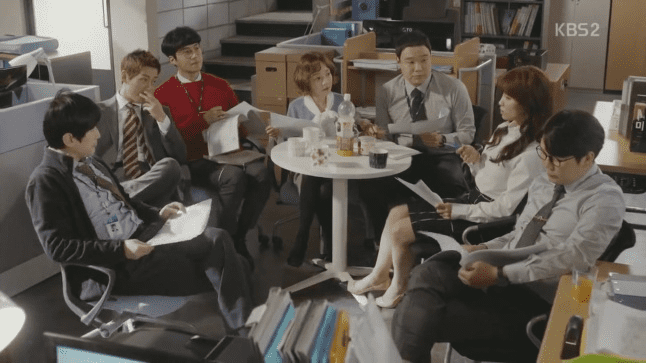 However, Namgoong Min’s character doesn’t do it all on his own. Every great superhero needs a good sidekick. Chief Kim has an entire team of compelling characters. Nam Sang Mi plays the main female and works in Chief Kim’s team. She’s the driving force that helps Chief Kim change from an anti-hero to Mr. Righteous, but what I really like about her character is that just when it seems she’s become a background prop in the drama, she becomes a key player that pushes events to happen. Not only does she guide Chief Kim at times, but some of the team’s crazy plans are inspired by her. Kim Won Hae has a similar role in that he becomes a point of stability for Chief Kim and grounds the team in reality since his reactions and backstory are more realistic than most of the main cast’s.

The whole team in Business Operations worked great as side-characters, aiding in Chief Kim’s plans and becoming a family throughout the drama. Some of my favorite scenes in the drama involved interactions between them or with other characters in the drama, like the cute love plot between the youngest member on the team and Chief Kim’s old assistant. This drama isn’t only entertaining because of the main cast, but great because of its secondary characters.

The show involves corporate corruption, so it should come as no surprise that the chairman of TQ Company is the final boss/big villain of the drama. He sits at the top and is the embodiment of a villainy in a suit: he talks down to everyone under him, he pays people off, steals money from his own company, and is a pretty terrible husband and father. D-to-the-O (as Chief Kim calls him) is not a very nice guy. 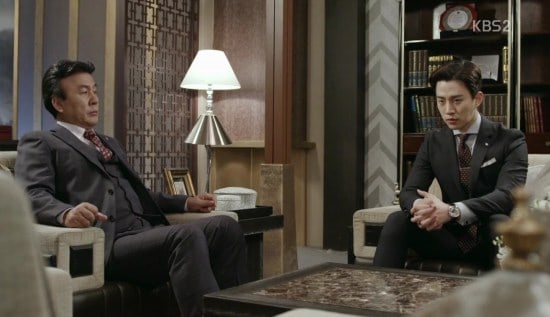 Just below him is a small army of cronies, some more powerful than others, like Seo Jung Yeon’s character or Junho’s. Throughout the drama, Chief Kim “levels up” as he takes on the company leadership; the stakes are raised and his complex and crazy plans have to become even more so as he fights up the ranks. 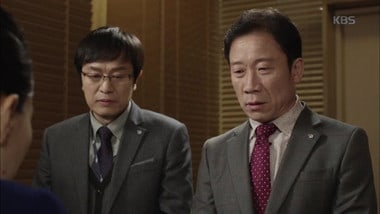 However, while these people make up the villains you might expect, one of the things I like about “Chief Kim” is that there’s quite a bit of in-fighting and competition between them. They don’t always sit in comfortable chairs, sipping coffee, and plotting against their employees. They have to compete with each other and deal with the consequences when any of their dastardly plans fail.

One of my complaints about the chairman, however, is that a big aspect of the drama includes his wife fighting against him to protect the company, but the drama never went into their background story. His wife’s actions help Chief Kim at numerous times and it’s her friendship with Nam Sang Mi’s character that initially gets the two to join forces to save TQ. There’s just not enough “why?” A little more info would’ve made him a more compelling villain.

The relationship between Chief Kim and Seo Yool isn’t a typical bromance. The two of them start out as polar-opposite rivals. Seo Yool starts out as a star prosecutor with a terrible personality who decides to use his genius to take on the corporate world as a bad guy. The explanation for this decision is pretty unsatisfactory, but it’s thanks to him that Chief Kim gets hired at TQ and they spend almost the entire show butting heads.

Whenever they were in a room together, I always paid attention. Even though I wanted a romantic relationship to blossom between the male and female leads, I’m glad the writer and director didn’t push such a relationship. It probably would’ve taken away from the development of Kim-Seo. 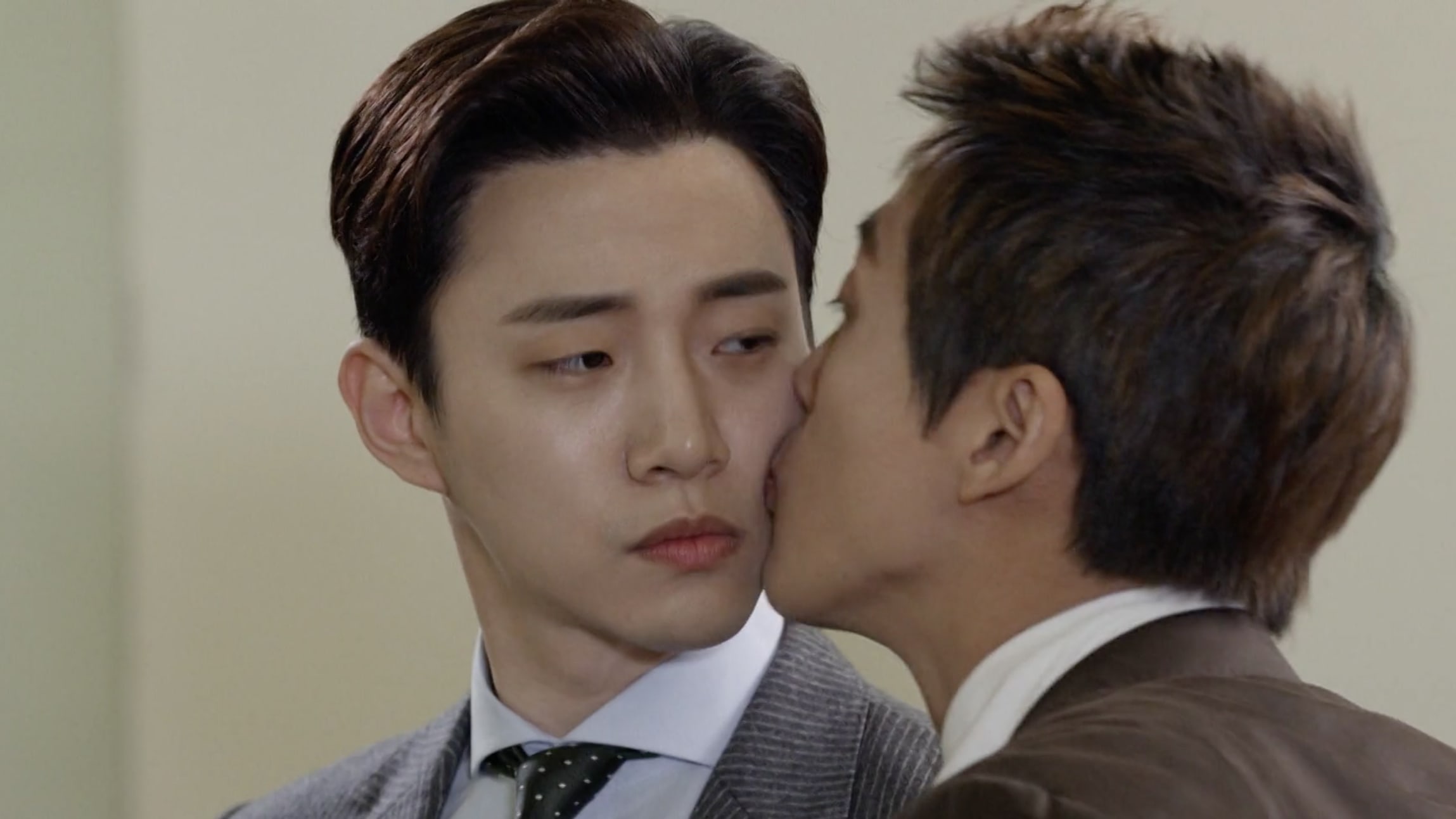 It’s clear from the beginning that they’re meant to be a bromance, but the writing for it wasn’t always strong. Some scenes made me feel a little uncomfortable with how Junho’s character treated Namgoong Min’s. I found some scenes easier to accept after watching behind-the-scenes footage where the two seemed to really get along. A lot of the initial tension in their scenes eased up halfway through the drama, too. Upon finishing episode twenty, I still wished that there was a little more romance, but I was satisfied with the different approach to this type of relationship.

An aspect of a drama that can attract a lot of attention from viewers and the media is its fashion. Drama characters can also be trend-setters. Was this what Namgoong Min hoped to achieve with some of his wardrobe choices? I don’t know. What can’t be denied is that some of his clothing choices gave the character of Chief Kim a distinct look. 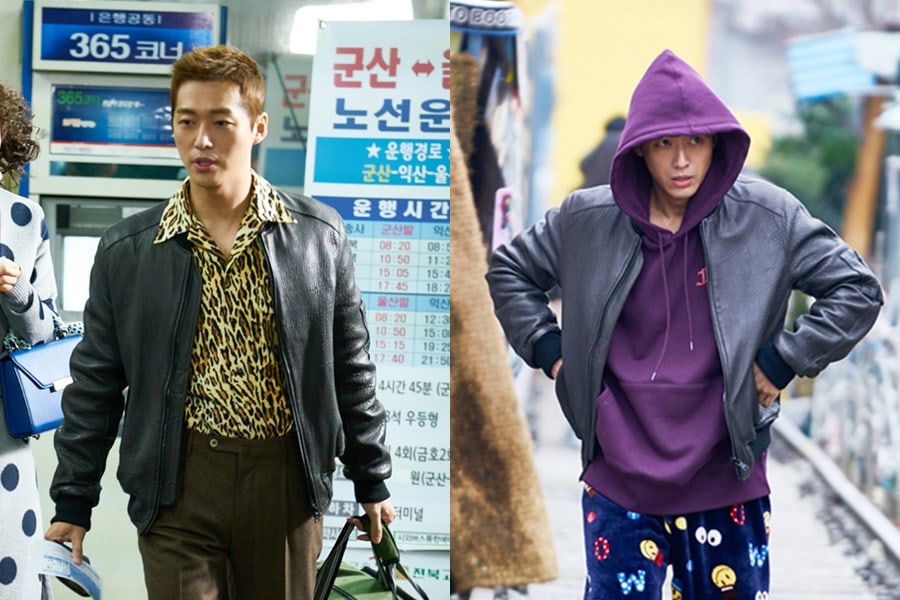 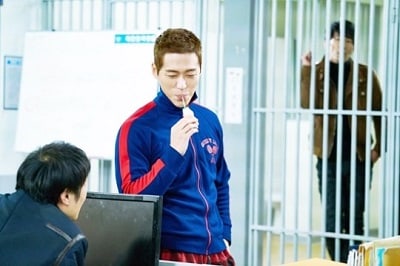 The show starts off with Namgoong Min sporting a more eclectic fashion that the character attributes to the area where he lives. This becomes toned down once he stars working for TQ, but his character still wears jackets with odd patterns or off-brown suits that go against traditional dress at large companies in Korea. 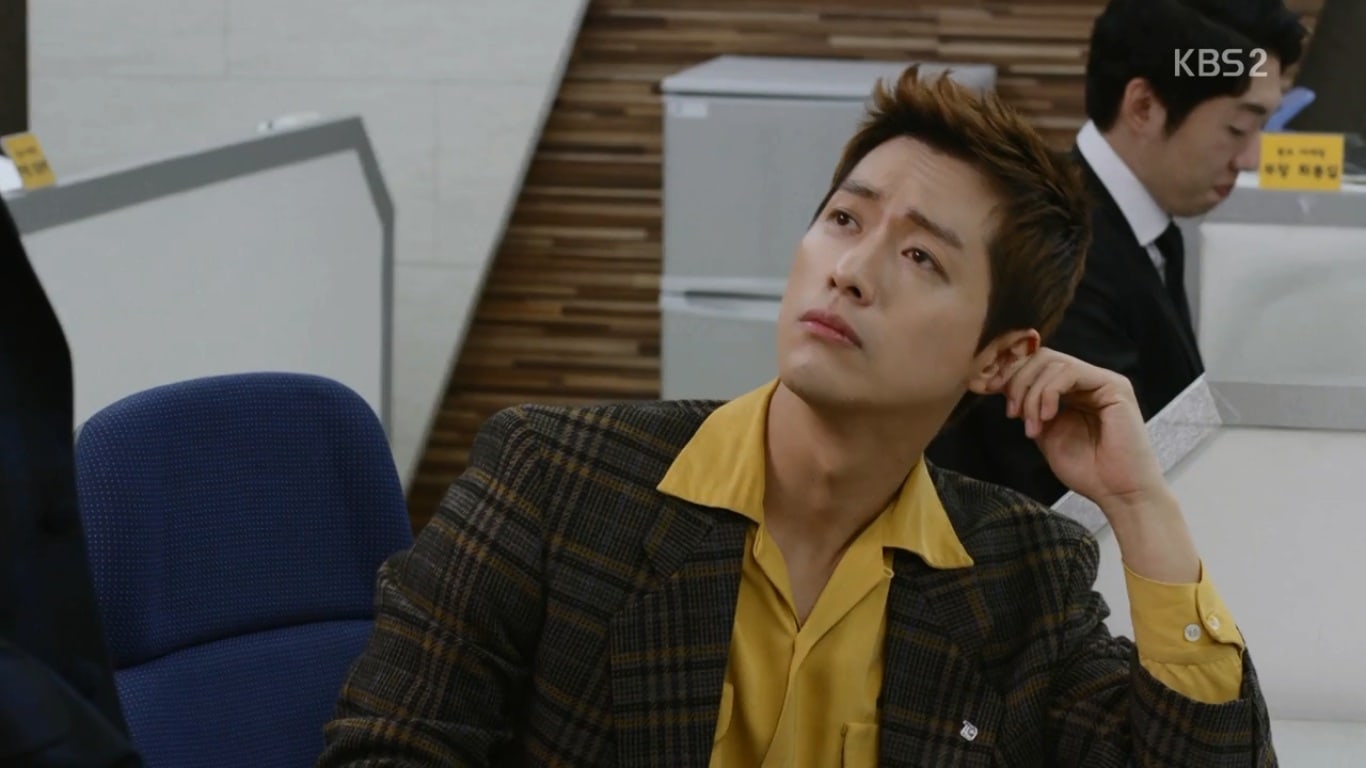 One fun scene is when Chief Kim decides to “go to war” in his own armor, a shirt/jacket combo that clashes and gets him stared at and even laughed at by others at the company. Namgoong Min was able to create a signature look that added more to his character and bolstered the aspects of his personality that the drama highlights. Will some of his fashion choices inspire others in the business sector? Could we see a “Chief Kim”-inspired fashion line in the future?

I really enjoyed this drama and I would recommend it to anyone looking for something funny and light and who doesn’t need a major love story to complete a drama. “Chief Kim” wasn’t as compelling as I initially thought it would be, but once I accepted that this was a drama that had no intention of taking itself seriously, watching became more enjoyable.

Namgoong Min did a fantastic job, and while Junho’s acting was not the most inspiring in the beginning, he showed definite improvement (to be fair, the writing for his character was pretty out there). I also liked how the female characters weren’t dependent on the men: Jung Hye Sung’s character went from being lackluster and frazzled to independent and intelligent, and Nam Sang Mi’s character stayed a key player in a lot of events. The side characters were great, too. I’m actually disappointed that some of the Business Operations team weren’t developed a little more. Only half the team got their own well-rounded parts in the drama’s events and the love story between the assistant and youngest team member faded into the abyss.

Some things that happened were a little too outrageous, like the various instances where a character was attacked or kidnapped. The action probably could’ve been just as good had the problems been kept within the company without bringing in a different group of gangsters every few episodes to do the chairman’s dirty work. The chairman didn’t need to call the nearest for-hire-bad-guy to tell me he was a villain. He just had to open his mouth for thirty seconds.

“Chief Kim” is a clown-fest, but that’s also part of its appeal. I laughed a lot, and sometimes that’s all you need from a drama.

If you haven’t watched “Chief Kim” already, check out the first episode!

heytoto currently teaches ELL in Seoul, South Korea, where she drinks too many lattes and hopes to get pictures of springtime cherry blossoms.