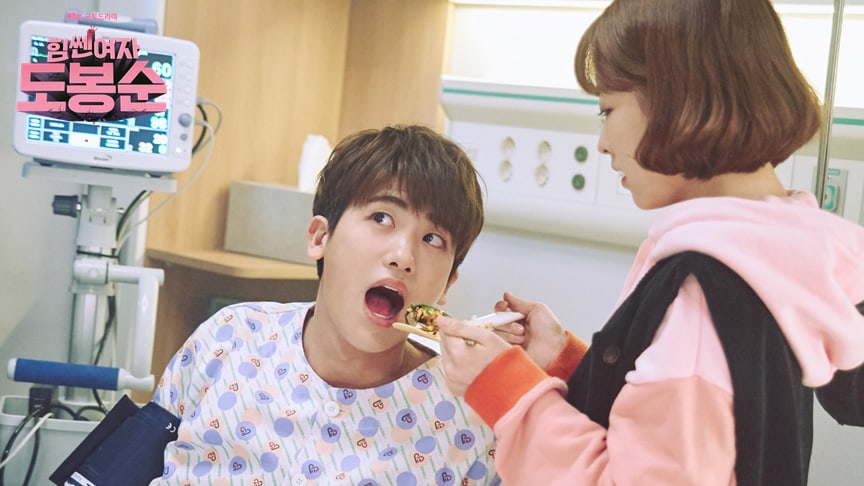 The first half of the new behind-the-scenes video shows Do Bong Soon (Park Bo Young) whipping together a giant bowl of her famous bibimbap for her family and Ahn Min Hyuk (Park Hyung Sik), who was bedridden in the hospital a few episodes back. Though the bibimbap was made for Ahn Min Hyuk, Do Bong Gi (An Woo Yeon) stops him from eating any, as he is not allowed to eat due to his hospitalization.

Actor Park Hyung Sik can’t help but break character to laugh at the ridiculous situation and he continues to make sad puppy eyes as the rest of Do Bong Soon’s family happily eats the bibimbap.

The second half of the video shows Ahn Min Hyuk hesitantly eating the spicy chicken feet dish that Do Bong Soon’s mother prepares for him. While his character can’t handle the spiciness of the dish, actor Park Hyung Sik couldn’t stop smiling because of how delicious the food was.

Meanwhile, new stills from the upcoming episode of “Strong Woman Do Bong Soon” are creating a lot of curiosity, as they show Park Bo Young both in heroic and life-threatening situations. Plus, it was announced that Park Hyung Sik finished recording for the drama’s OST.

Plus, watch the first episode of “Strong Woman Do Bong Soon” on Viki!