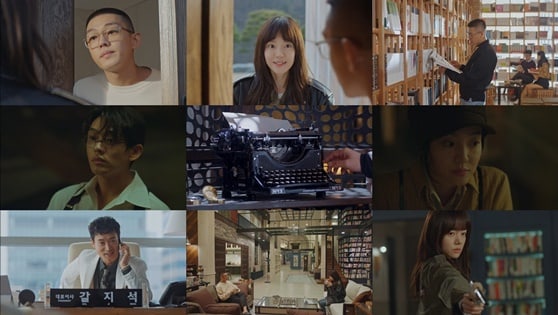 On April 7, “Chicago Typewriter” premiered with a solid story and promising ratings. According to IPTV, it was able to receive an average viewership rating of 2.6 percent, with its highest rating at 4.4 percent.

Jeon Sul, who happens to be a part-time worker, is elated when she gets the chance to make a delivery to Han Se Joo’s house. While she initially becomes suspected as a stalker, Jeon Sul manages to save Han Se Joo from the real stalker. As Han Se Joo watches Jeon Sul save the day, he becomes reminded of a past image of Jeon Sul from 80 years ago.

Writer Jin Soo Wan’s storytelling ability and Kim Chul Gyu’s delicate directing really stood out in this episode, with the first encounter between the two main characters feeling much like a romantic comedy. However, the episode also incorporates elements of mystery as it shows the Chicago typewriter moving on its own, writing a message for Han Se Joo.

Meanwhile, “Chicago Typewriter” airs every Friday and Saturday. Watch it exclusively on Viki!