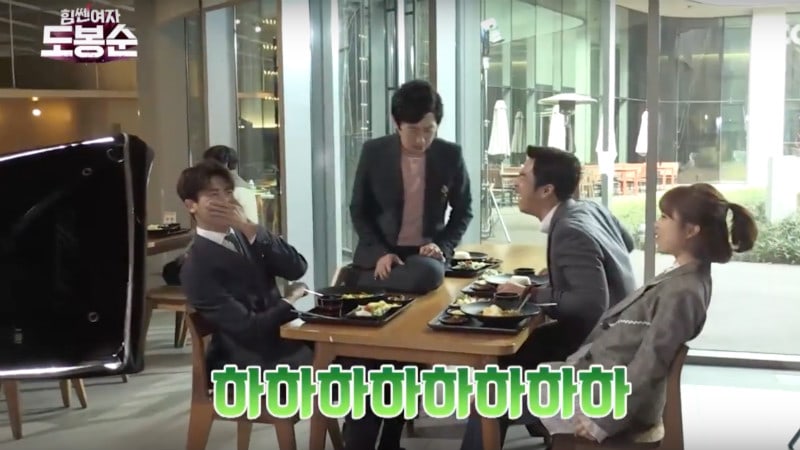 JTBC’s hit drama “Strong Woman Do Bong Soon” has all sorts of funny scenes, making viewers clench their stomachs as they laugh along to the hilariously addictive storyline. Recently, JTBC revealed a behind-the-scenes clip zooming in on Kim Won Hae, a scene-stealer who plays both an ungainly gangster and a sassy employee at Ainsoft.

The clip covered the filming of the scene where Kim Won Hae’s character is frantically trying to warn Park Hyung Sik’s character about Do Bong Soon’s strength, not knowing that he is already aware of her abilities. In the clip, the cast burst out laughing each time Kim Won Hae said his lines, which were all completely improvised. The cherry on top was when he chucked a piece of pickled radish and stomped off, claiming his spot as the king of ad-libs.

Park Bo Young especially seemed to love Kim Won Hae’s acting, as she struggled to hold in her laughter during each take. At the end of filming, she said, “This is so difficult. Am I the only one having a hard time because this is so funny?”

Brace yourselves and watch the hilarious clip below!