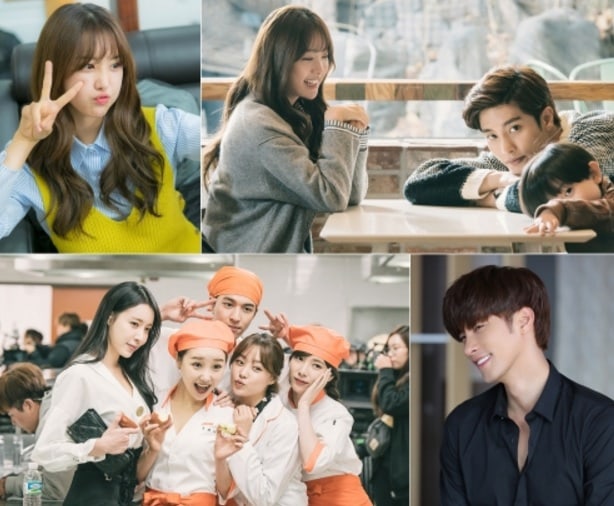 New behind-the-scenes stills of the upcoming drama “My Secret Romance,” starring Song Ji Eun and Sung Hoon, have been released!

In the photos, the actors look like they’re having a great time while filming. These stills really show how close they are to each other.

Song Ji Eun and Kim Jae Young play best friends in the drama, and their bright smile surely makes the audience look forward to their chemistry. Kim Jae Young reportedly cared a lot about the child actor Joo Sang Hyuk, and the photo of him holding the sleeping kid proves his love for him.

The producing director Kang Chul Woo stated, “We filmed this drama in a very family-like atmosphere and the viewers will also be able to sense that warmth. Since the filming atmosphere was so good, no words are necessary about the loveliness of the drama.”

“My Secret Romance” is about a man named Cha Jin Wook (played by Sung Hoon) who has been single for three years, and a woman named Lee Yoo Mi (played by Song Ji Eun) who meets him and disappears like Cinderella with only a shoe to remember her by. Later, the two reunite as co-workers and the story starts to unfold.

The first episode will air on April 17 at 9 p.m. and continue airing every Monday and Tuesday.