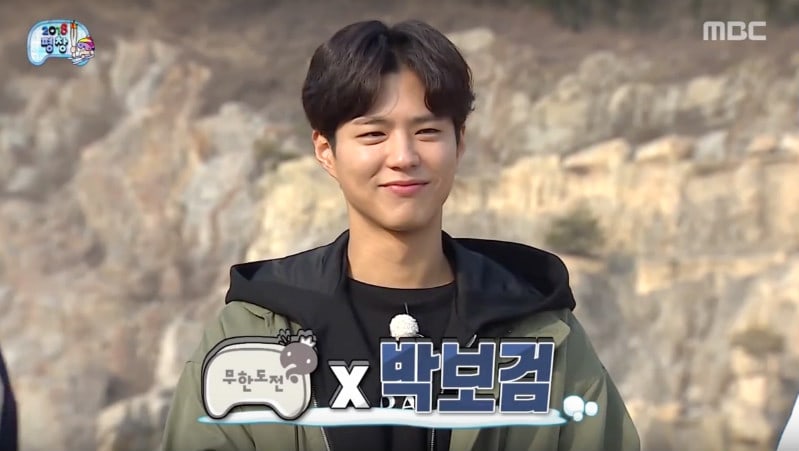 Park Bo Gum finally made his guest appearance on MBC’s “Infinite Challenge” during the 2018 Pyeongchang Olympic special that aired on April 8.

On this episode, the “Infinite Challenge” cast participated in winter olympic sports such as bobsleigh and curling. However, due to member Gwanghee’s army enlistment, the crew found themselves at a odd member count and therefore unable to participate in some of the sports. Luckily, the production team was able to recruit Park Bo Gum to fill the empty spot for the day.

When Park Bo Gum finally revealed himself on the show, the members showed their enthusiasm and excitement for the actor’s appearance. Yoo Jae Suk commented, “Park Bo Gum instead of Kwanghee! I was worried about what we will do after Kwanghee had left, but something very good has happened.” He also stated, “He smells so fragrant. He smells like spring!” Haha also jokingly shouted, “Thanks a lot Kwanghee,” showing enthusiasm for the actor’s surprise appearance.

When asked about his thoughts on being on the show, Park Bo Gum stated, “It is an honor. This is my first time being on MBC and I’m so glad it is with ‘Infinite Challenge.’ I am a big fan of the show, so this feels like a dream to me.”

Following this, the “Infinite Challenge” members conducted an initiation ceremony for Park Bo Gum which included dancing and making a acrostic poem with the syllables of his name.

Check out Park Bo Gum on the latest episode of “Infinite Challenge” below!