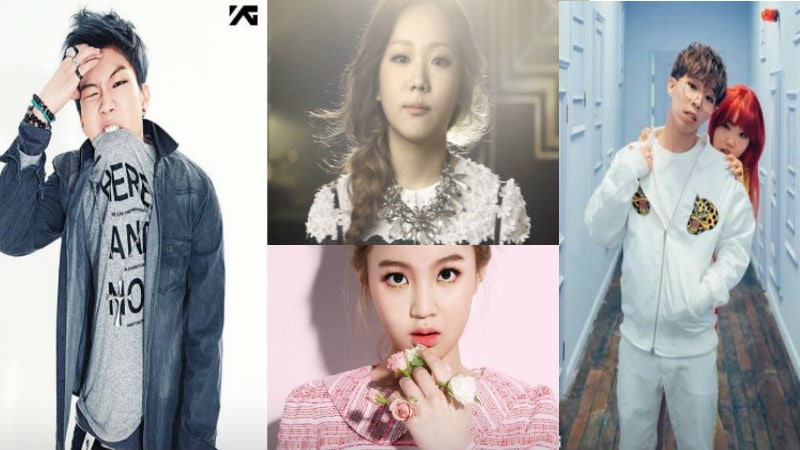 “K-Pop Star,” the SBS audition program that produced many artists active today, recently wrapped up its sixth and final season. As the show came to an end, YG artists who first appeared on “K-Pop Star” have expressed their thanks to Yang Hyun Suk.

On April 13, Yang Hyun Suk shared some of their messages in a series of Instagram posts.

First, he uploaded a text from Katie Kim, the winner of “K-Pop Star 4.” Along with a sprinkling of emojis, Katie Kim wrote, “CEO, good morning. This is Katie Kim. I just wanted to say you worked really hard while doing ‘K-Pop Star’ for the last six years..!! Sometimes I still can’t believe that you are my CEO, and I’m so thankful that we can be making music together :-). And thank you for always being someone I can respect. While filming the show, you were very very cool, and I haven’t forgotten your gem-like words of wisdom..!! As for me, I will work hard preparing so I can stun on stage. I hope today is another day full of blessings! Fighting!”

Next were two messages from sibling duo Akdong Musician, the much-loved winners of “K-Pop Star 2.” In the first message, Lee Chan Hyuk wrote, “It’s already been five years since we sang ‘Don’t Cross Your Legs’ in front of you.. Even we, who seemed like we would be children forever, have become adults and full-fledged singers. Although we still have a long way to go, it is truly an honor that we took our first step with ‘K-Pop Star’ and move forward with YG! We are in Cebu for a shoot, but amazingly many people here recognize us. In realizing we have received a one-in-a million kind of opportunity, the weight of our dreams seems to have increased. You worked hard until the final season, thank you! Walk only on the flower road.”

His sister Lee Soo Hyun then said, “For six years you really worked so hard ㅠㅠ. Thank you so much for discovering us. Now that ‘K-Pop Star,’ the show that seemed unlikely to end, is ending, even our hearts feel strange. You probably feel it even more so. We will work harder and build the first floor of a new building for you. Thank you and love you always.”

For Lee Hi, who participated in the first season of “K-Pop Star,” less was more. She followed a link to Yang Hyun Suk’s Instagram video regarding the show’s finale with the simple message, “Thank you. I will also do better!”

Lastly, Yang Hyun Suk shared a couple of messages from WINNER’S Lee Seung Hoon, a participant during the first Season of “K-Pop Star.” In the message at the top, Lee Seung Hoon shared his own complex feelings about the show’s end. He wrote, “With the time that has passed and complicated emotions all mixed together, whether this feeling is good or something else, I can’t really make sense of the emotion I feel rising in me. Thank you for creating this golden moment in my life that would not have been part of my fate otherwise.” In the other message Lee Seung Hoon mentioned Yang Hyun Suk’s role on the show and said, “Now that ‘K-Pop Star’ has ended, I feel weird too. I’m so thankful to the show and you for making my current self possible. Good Job! You were an awesome teacher and the best mentor to countless participants.”