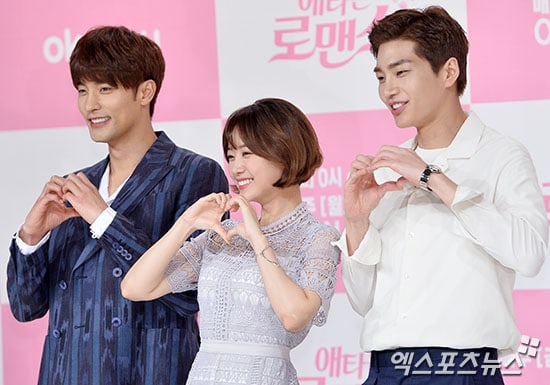 On April 13, the director joined the drama’s stars, Sung Hoon and Song Ji Eun, for a press conference at Amoris Hall in Seoul’s Times Square.

During the conference, the director commented that he had first been introduced to Song Ji Eun when he was working with one of her fellow Secret members. Back in 2015, Kang Chul Woo worked with Jun Hyosung in the mystery drama “Cheo Yong 2.”

“Miss Jieun’s loveliness seemed like it would help out [the drama], so we casted her,” he said.

Later in the conference, Song Ji Eun also commented on their first meeting, saying that she would visit the set of “Cheo Yong 2” to support Jun Hyosung during late nights of shooting.

“The director must have remembered me from that,” she added.

In response, the event’s MC Kim Ji Min playfully asked her if she had been wearing make-up at the time, to which Song Ji Eun said “Yes,” inciting laughter from the attending cast and crew.

Meanwhile, “My Secret Romance” will air its first episode on April 17.

Hyosung
Secret
Song Ji Eun
XPN
My Secret Romance
How does this article make you feel?