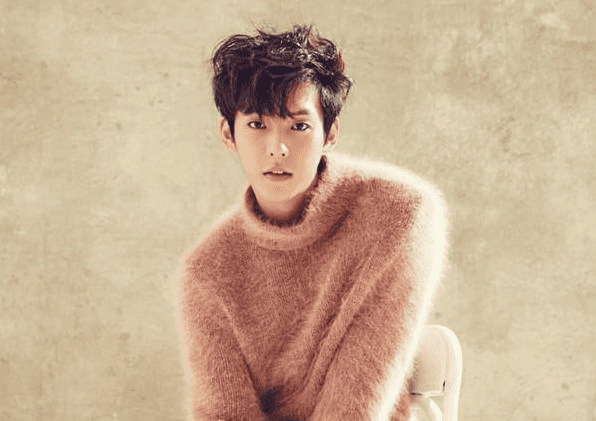 However, according to netizens, the woman in question commented on Instagram claiming she never dated Minhyuk.

Here’s what happened: Minhyuk recently sent his alleged ex-girlfriend a message through social media. Her current boyfriend, after seeing the message, sent Minhyuk a warning comment on Instagram. Once the situation became an issue among fans, Minhyuk deleted his original message and explained what happened in more detail to curb any rumors.

He said, “It’s awkward to go on and on explaining what happened, but because there is a possibility for misunderstanding, I will briefly explain.”

“During the day yesterday, I sent my ex-girlfriend a message. I haven’t spoken to her in a while and was wondering how she was doing, so I sent a message asking, ‘Why don’t I have your number?’ That’s all, but in the end, it’s something I shouldn’t have done. I unnecessarily did something stupid,” said Minhyuk.

He continued, “There was no real meaning behind the message. I was just asking how [she] was doing in passing, but it randomly became a big deal. I think [my ex’s] boyfriend was upset, and he posted a comment on my Instagram expressing his annoyance. Regardless of why I sent the message, not knowing she had a boyfriend and sending the message is my mistake.”

“It gave me the thought that recalling past relationships is foolish. It’s something that Melodies didn’t have to know, but rather than letting rumors run rampant, I thought it would be the right thing to do to just be truthful.”

Wrapping up, Minhyuk said, “There’s nothing more to it. Please don’t jump to conclusions. Recent rumors about me are almost all false. Both the BTOB members and myself have a deep love for Melodies. If there are any fans that were disappointed with the recent happenings, I apologize. I will be more careful in the future.”

Minhyuk’s message explaining what happened has been deleted from the fan cafe.