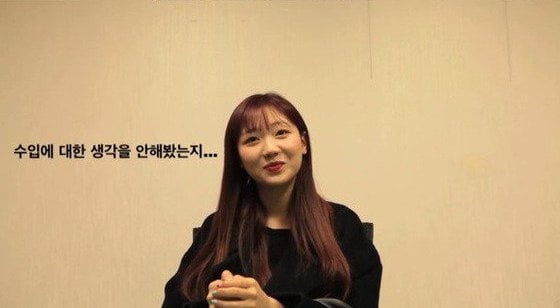 In a recent teaser for her upcoming variety drama, KBS’s “Idol Drama Operation Team,” Lovelyz’s Soojung opened up about her group’s current salary, or lack thereof.

When an idol group debuts, much of the income made during the beginning of their career are used to settle any “balance” they have remaining with their agency. Since their respective company has usually footed the monetary expenses needed for their training, any production costs, wardrobe, and other aspects of becoming an idol, these young stars are subsequently “in debt” if and when they debut.

Soojung revealed how Lovelyz has yet to break even with their own agency, and how they still “owe money.” When asked about what she would like to do once she receives her own profits, the Lovelyz member explained, “These days, I want to hurry and give back to my parents when I see them having difficulty working. I want to provide [my parents] with money, and cover my older sister’s university tuition fees.”

She also addressed when the group will be allowed to have their own cell phones, and explained, “We’re set [to have phones] once we win number one on a music show.”

Meanwhile, Soojung will be joining six other girl group members in the upcoming drama “Idol Drama Operation Team,” where they will be writing and acting out their own scripts. The unique program will premiere on May 29 via Naver TV Cast and YouTube before airing on television.

Lovelyz
Soojung
How does this article make you feel?