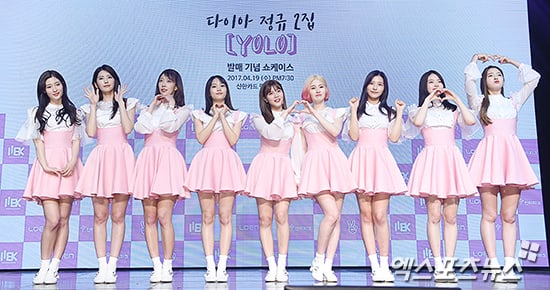 Update: DIA’s Eunjin Is Discharged From The Hospital After Falling Ill During Showcase

A representative of MBK Entertainment provided an update on Eunjin on April 20 and said, “Eunjin was discharged from the hospital in the early hours of the morning. Thankfully, she has had a fully recovery and will join the other members of DIA on M!Countdown.”

On April 19, DIA held their comeback showcase for their new album “Yolo.” The showcase was broadcast through Naver V Live and emceed by labelmate Shannon and DIA’s producer Kim Kwang Soo.

During the showcase, Eunjin was seen having difficulties with the choreography, eventually stopping altogether. In the middle of the showcase, she disappeared off stage.

The MCs explained that Eunjin had previously taken medicine on an empty stomach due to her busy schedule and had been taken to the hospital after experiencing difficulties breathing.

Member Huihyeon said, “On top of the press conference, I think that the time we’ve put into meeting everyone has taken a toll on our bodies. We will go and see Eunjin at the hospital later.”

She added, “It seems wrong to the fans not to tell them what’s going on.” The other DIA members also later apologized for the unexpected incident.

DIA
Eunjin
XPN
How does this article make you feel?