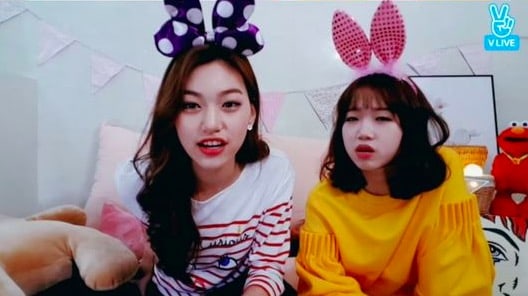 On April 20, Choi Yoojung and Kim Doyeon revealed their personal preferences for dating through a broadcast on Naver V Live.

She then surprised Kim Doyeon by choosing her ideal type. Although she’d said earlier that she would like to date someone younger, she chose Highlight’s Yoon Doo Joon. She said, “He’s got such great features. I also like people with a darker skin tone like him.” Kim Doyeon piped up, “Yoon Doo Joon must have been shocked if he were watching.”

The two best friends also talked about their cute relationship. When asked whether they’ve ever fought, they answered, “Of course. All the time. If you don’t fight, that’s not a real relationship. How can you not fight?”

Choi Yoojung then clarified, “We have completely opposite personalities. I don’t talk much and Doyeon likes to talk. I think we fight because a lot of different things build up.” They explained that making up afterwards is pretty easy afterwards. They said, “We both don’t like being too cheesy, but we do have to have a conversation afterwards.”