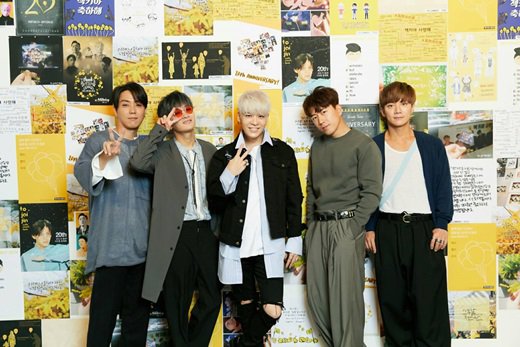 On April 27, SECHSKIES participated in a special interview for their upcoming 20th anniversary album.

When asked if they tune into “The Return of Superman,” which former SECHSKIES member Go Ji Yong is currently appearing on with his son Seungjae, Eun Ji Won said, “To be honest, I’m not sure when exactly ‘Superman’ is on. It airs on Sunday and I think we have filming on the weekends. But our hearts are always open to him.”

When asked if Go Ji Yong might participate in any special event for the group’s 20th anniversary, Kang Sung Hoon said, “Because he has his own work, he is only participating in ‘Superman’ because filming takes place on the weekends. Because he does have his own job, promoting with SECHSKIES might be difficult.”

Eun Ji Won added, “We would also feel apologetic if we bothered him too much. We hope that he can participate in something very important or special in the future.”

Kang Sung Hoon said, “Because he is the head of a family now, we have to respect his personal and professional life.”

SECHSKIES’ album will be released on April 28 at 6 p.m. KST. The double title tracks are produced by YG producing team Future Bounce and Epik High’s Tablo. SECHSKIES will also host a press conference and fan meeting to commemorate the special anniversary album.

The Return of Superman
SECHSKIES
Go Ji Yong
How does this article make you feel?