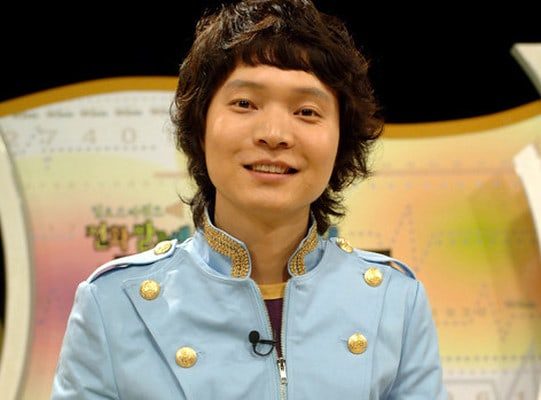 On April 27, management agency Koen Stars announced they had signed an exclusive contract with Shin Jung Hwan. The agency stated, “Having known of Shin Jung Hwan for a long time through different programs, and with many old mutual acquaintances, we have closely observed his growth. During the past years away from the public eye, Shin Jung Hwan refined himself through trial and error, and we spotted potential in him once again.”

According to the agency, they had to spend a long time convincing Shin Jung Hwan to believe in his own true value as an entertainer. They explained that Shin Jung Hwan previously was the MC that the three main broadcasting stations loved to cast the most. Through different programs, he showed he was funnier than most comedians, and he particularly made an impression as an MC on “Radio Star.”

Although Shin Jung Hwan left the entertainment industry in 2010 after the scandal over his gambling and false story of dengue fever erupted, broadcast stations still wished for him to make a return because of his talent as an entertainer.

Through Koen Stars Shin Jung Hwan stated, “I feel many conflicting emotions reappearing in front of you all again. I still have a lot of regret for my actions from seven years ago. As I was receiving more love than my talent deserved and the love and support of many, when the issue broke, I was more concerned with not losing what I had instead of righting my wrongs.”

He continued, “While regretting and reflecting alone over the past seven years, my biggest realization was that the love I received from all of you was the most precious thing in my life and that I missed you all very much. While there are likely many people who are still disappointed in me, I wanted to be brave and try.”

Shin Jung Hwan also explained that he would take the advice and criticism he receives to heart and that he would treat it all as life lessons. He also said he would try and repay the concern and love people have shown for him by working to share positive energy with others. Shin Jung Hwan also apologized once again, stating “I would like to apologize to many of you who were upset with my rash and immature actions. With the mindset of just starting out, I will humbly and carefully do my very best.”

It has also been reported that Shin Jung Hwan is expecting a child with his wife.

On April 28, Koen Stars confirmed that Shin Jung Hwan’s wife is 21 weeks pregnant. “She is expected to deliver around the end of August to September.”

Shin Jung Hwan married his wife in December 2014 after dating for four years. The couple held a private wedding ceremony with only family and close friends present. Afterward, Shin Jung Hwan and his wife moved to Singapore and started an ice cream business.

Clearly, Shin Jung Hwan faces many changes ahead both professionally and personally. It will be interesting to see what project he takes on first. Notably, at the end of last year, Super Junior’s Kyuhyun shared that he would choose Shin Jung Hwan to replace him on “Radio Star” while he completed his military service, if the public would allow it. With the recent confirmation of Kyuhyun’s enlistment date, it will be interesting to see if Shin Jung Hwan makes a guest appearance on the show anytime soon.

What do you think about Shin Jung Hwan’s return? Share your thoughts in the comments below!