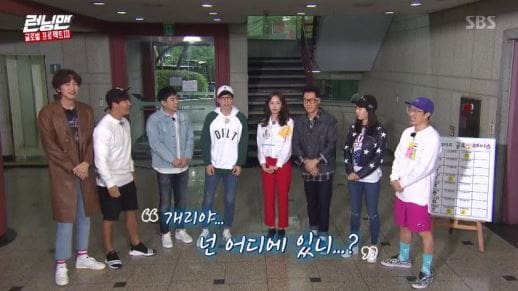 Gary’s whereabouts is the latest topic of interest on the most recent episode of SBS’s “Running Man.”

Leessang’s Gary surprised fans when he got married in secret and surprised them once again when it was revealed that the rapper had gotten married without his friends knowing, including fellow “Running Man” members.

During the episode, Kim Jong Kook and Lee Kwang Soo reiterated that they did not know anything about the ex-member’s relationship. Gary’s previous on-screen girlfriend, Song Ji Hyo, added to the statement by revealing that Gary had changed his number without telling any of the members. Following this, Yoo Jae Suk half-jokingly said, “Gary, where are you? Please contact us. We promise we won’t try to go and find you.” Lightening up the mood, HaHa revealed, “The funny thing is, he keeps anonymously sending me hats.”

Watch the latest episode of “Running Man” on Viki!