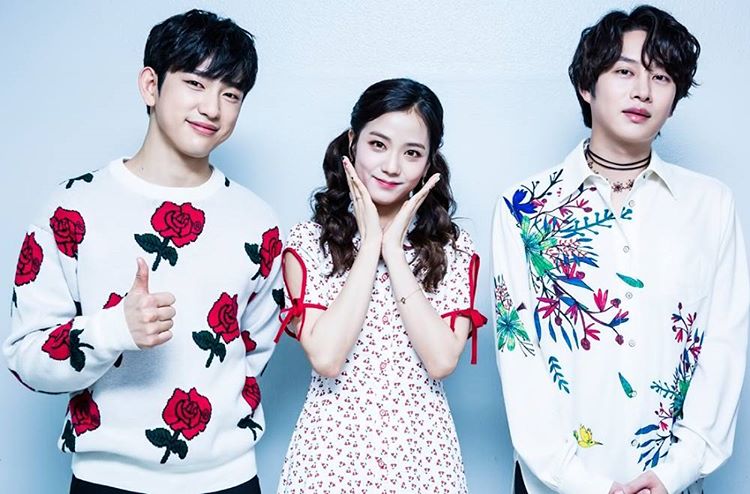 On May 3, he uploaded to his Instagram account a picture of himself with the two other “Inkigayo” hosts, GOT7’s Jinyoung and BLACKPINK’s Jisoo, and wrote a long message that was both touching and funny.

The caption reads, “It’s been a while since I was a special MC for ‘Inkigayo.’ I was touched by Jinyoung and Jisoo, who kept talking with me and encouraging me while I was standing in the corner feeling awkward among so many young people. I may not look like it, but I’m pretty shy.

“Jinyoung was a gentleman with a charming smile, and Jisoo reacted to everything in a way that makes the people around her happy. She was a really bright girl.

“Thankfully, SECHSKIES had their comeback so I wasn’t lonely. They looked great performing ‘Be Well’ and ‘Sad Song.’ When Super Junior makes a comeback, we’re going to be handsome and cool like SECHSKIES.

“My older sister was a huge fan of SECHSKIES, and if I remember correctly, the backup dancer from their concert performance of ‘Pray’? Was it? The one with the sunglasses danced really well in the instrumental part of the song. And I think Lee Jae Jin sang ‘Betty’ by Blink. Fighting, SKT’s Blank! #SayingWhatever #NonsenseSoundsBestWhenKimHeechulSaysIt”

His last sentence makes reference to a League of Legends gamer from the team SKT T1. Are you able to follow Kim Heechul’s train of thought?

GOT7
Super Junior
BLACKPINK
Inkigayo
Kim Heechul
Jinyoung (GOT7)
Jisoo (BLACKPINK)
How does this article make you feel?