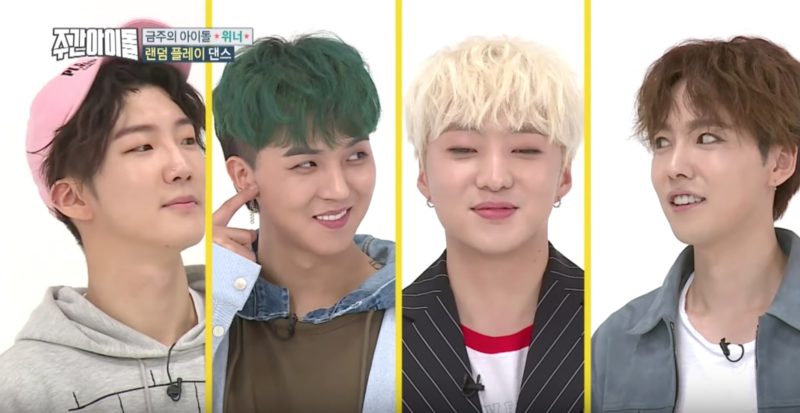 During their guest appearance on the May 3 broadcast of “Weekly Idol,” WINNER took part in the famous random play dance challenge.

Before they began, hosts Jung Hyung Don and Defconn joked about how YG Entertainment’s artists seemed to particularly struggle with this game. The hosts decided that they would use the same penalty for mistakes that was used on past YG artists – naming the examples of BLACKPINK members and G-Dragon.

When Lee Seung Hoon asked if there as a prize if they did well, the hosts told him they would give him a special opportunity to flatter Yang Hyun Suk via video message, since it was revealed earlier that he is especially good at staying on the boss’s good side.

The WINNER members made it through the first song, “Really Really,” with no problems. “Fool” came on next, and everything was going smoothly before Kim Jinwoo made a small misstep. Jung Hyung Don and Defconn told him they’d give him a free pass on that mistake, and the song switched back to “Really Really.” A few seconds in there was a small collision between Lee Seung Hoon and Kim Jinwoo, Song Mino was pointing at Kang Seung Yoon as the member out of place, and the hosts stopped the music. Immediately, Lee Seung Hoon claimed that everyone had made a mistake except for him. Essentially, everyone was comically busy trying to save themselves from the toy hammer.

Finally, Jung Hyung Don and Defconn said they would leave it to up to the members’ own consciences. They asked the members to truthfully raise their hands if they were the reason the group messed up, promising an advantage to whoever was honest. After a pause during which nobody moved, the members all suspicious of the hosts’ motives, Kim Jinwoo raised his hand. 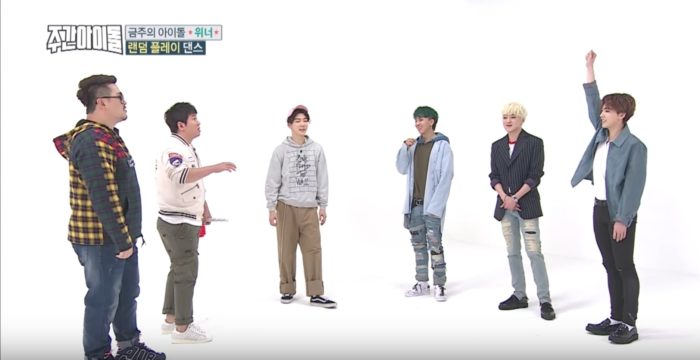 Jung Hyung Don and Defconn informed Kim Jinwoo he was safe from receiving the penalty, clearly surprising the other members. Quickly following in Kim Jinwoo’s footsteps, Lee Seung Hoon raised his hand as well. Although he did not admit to making a mistake himself, he tried to humbly explain that as the group’s most experienced dancer, he had clearly failed to train the other members enough. As soon as he finished speaking, Jung Hyung Don and Defconn hilariously agreed and made it clear he was chosen for the penalty—to Song Mino and Kang Seung Yoon’s delight.

Once Lee Seung Hoon received the penalty, the group started on their second attempt to get through the random play dance. The group was not even tripped up when Song Mino’s solo “Fear” started to play, showing perfect synchronization even as they freestyle danced energetically to the song. Finally, “Don’t Flirt” played once again, and Kim Jinwoo was called out for his dance mistakes. The hosts revealed that they had actually given Kim Jinwoo free passes through his earlier mistakes, and Kim Jinwoo admitted good-naturedly that he had messed up a lot.

Watch all of WINNER’s goofing around yourself in the clip below!

WINNER
Weekly Idol
How does this article make you feel?