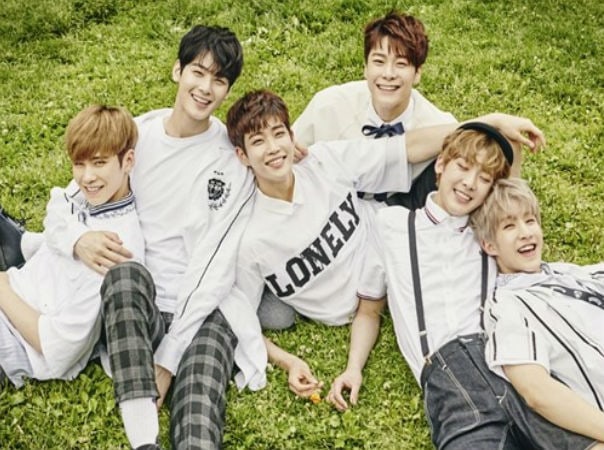 May 5 is Children’s Day in South Korea. On May 4, ASTRO shared some adorable pictures on their Twitter of themselves as young children to celebrate the holiday.

ASTRO’s JinJin also posted a picture of himself fishing. The caption reads, “This is me when I was six haha. The me that liked taking pictures, even while focused on fishing, would turn and smile like that when my mom called for me. Do I look the same now?”

Yoon Sanha shared a childhood photo with a more active pose. He shared it with the message, “Roar! This is little Sanha. Um… My picture is from so long ago I don’t really remember it, but if it was Children’s Day, I remember going to the park and having fun haha. I would like it if every child had a lot of fun playing today. And don’t get hurt!!” He followed this with hashtags joking that “Little Sanha is also going to play.” Adding to the cute factor, throughout the message he spelled his name in a way that imitates the lisp pronunciation commonly heard from very young Korean children as they are learning to speak.

Rocky also shared a childhood photo filled with personality. He wrote, “This is little Minhyuk haha. They say I had much more aegyo back then than I do now. I guess I’ll have to go back to being like that.” Rocky also included a hashtag that stated he was #ROHA’sBallofLove, and he spelled out some classic aegyo sounds.

With a beaming childhood photo, Moon Bin thoughtfully considered parents in his message. “Today is Children’s Day, it’s our world~ You know that we are always children to our parents, right? haha. For at least today, what do you think about sticking close to your parents?”

MJ’s childhood photo also showed off a dimpled smile. For his caption he said, “Everyone say kimchi~~ Hope you make good memories with your family on Children’s Day. Written by M Kid.” (‘Say kimchi’ is analogous to the English-language phrase ‘say cheese’ when taking photos).

Don’t these little faces just bring a smile to your face?