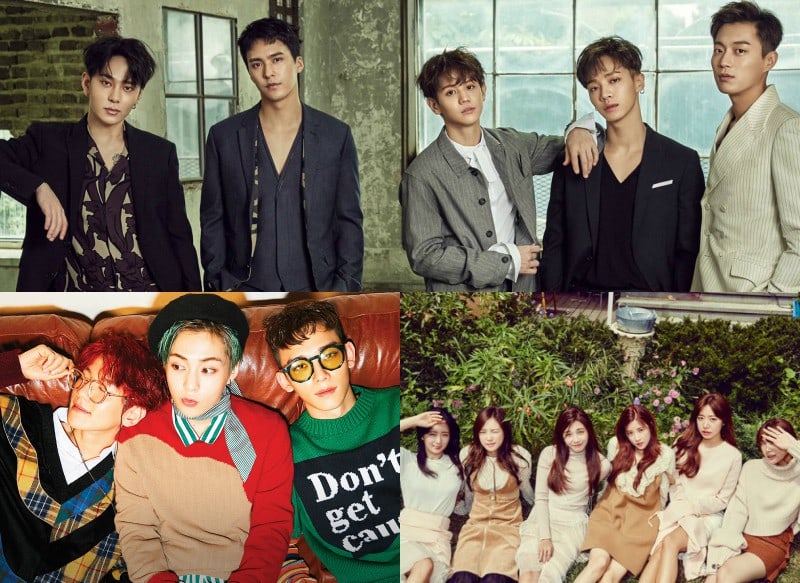 Korean music is life for all of us, there’s no denying it. But many Korean artists have debuted internationally, as well, quite often in Japan. So, to all of you K-poppers out there who haven’t seen a Japanese MV yet, I welcome you to a whole new world. To those of you that already have, this first one’s for you.

If any group could be known for their habit to blow your mind, it’s EXO. Their sub-unit, EXO-CBX, certainly doesn’t disappoint either. Not only are their moves perfectly in sync, their concept alone reaches a whole new level. With a cross between the circus, the casino, and the undead, it’s hard to consider this MV as anything less than perfection. To be honest, I’d be content to watch “Ka-CHING!” on repeat all day.

When it comes to K-pop groups and Japanese MVs, Highlight’s “Kimi Wa Dou” is the perfect package. Maybe it’s the lovesick look in their eyes, or maybe it’s the funky, smooth rhythm to their lyrics. Regardless of the reason, the suave and sexy way in which Highlight confesses their love is bound to make you fall head over heels.

Yes, that’s right. BTS has a Japanese MV. Make sure you’re not in public when you watch this. I’m warning you now, you will be getting some major feels. “For You” is, without a doubt, one of the most romantic MVs you will ever watch. The adorable way in which BTS portrays the journey of a young love will certainly warm your heart and leave you grinning ear to ear.

Wanna know who can really pull off a Japanese MV? Check out AOA’s “Ai Wo Choudai.” Not only can AOA totally rock those racing stripes, they really know how to portray a captivating story. And just when we thought the MV couldn’t get any better, the Japanese legend himself, Takanori Nishikawa, makes an appearance. With his vast musical expertise and AOA’s flawless performance, this MV is a definite success.

AH! It’s so sad! If only we could all be missed in the same way that Boyfriend misses their lovers. With those dramatic gazes and longing expressions, the members portray a loss beyond words. It really makes you wanna just reach out and comfort them, but alas, this is only a MV. *Sigh* The struggles are real, my friends.

“Love Tension” may be a little old in terms of K-pop, but 4Minute certainly can hold their own amongst all the recent competition. Taking an older fashion in hand, their tuxedo suits and slick hairstyles flawlessly convey the classic Japanese style that dominated the J-pop scene for over a decade. And let’s not forget those flashy digital effects. During the time when this MV was released, synchronized effects were becoming all the rage.

If any MV deserved more recognition, it would be MAP6’s “No Surrender.” Since Japanese MV’s aren’t as well-known among K-pop fans, this MV stands alongside many others as one in need of some definite love. MAP6 is a very talented group, especially as the rookies that they are. The fact that they produced a Japanese MV this early in the game is quite impressive. Not only that, their ability to rap in two completely different languages is something I give some major kudos to.

If you haven’t already fallen in love with Apink, their “Bye Bye” MV will do the job just fine. With a sweet, springy vibe and a colorful backdrop, the MV itself is very eye-appealing. In addition to this, Apink adds a soft techno beat mixed with a flair of classic pop. As for the final touch, we all know it wouldn’t be complete without those catchy dance moves. So, get up, dance along, and you’ll see what I mean.

Am I the only one feeling like I just stepped into a sci-fi anime? With their MV “ID,” UP10TION fits all the required elements. They’ve got the grunge, they’ve got the neon, and they’ve even got those spotless white jackets. The only thing that could make this MV more complete would be if they released a story version to go with it. I’m definitely dying to delve into this concept for a little while longer.

Can I just say it? D-LITE (BIGBANG’s Daesung) is perfectly suited to Japanese music. In “Look at me, Gwisun,” he’s got everything: the style, the charisma, the voice, even the girls. By the end of the MV, I was totally hooked by D-LITE’s catchy chorus and chest-poppin’ dance moves. I can only hope he returns with more MVs like this in the future.

No one can deny that FTISLAND is a master at Japanese MVs. Over the course of their long career, they’ve done it all: the J-pop, the emo, the ballad, and of course, the J-rock. If you’re in the mood for a song that you can rock your heart out to, then their latest MV, “Shadows,” is the one for you.

I’ll admit it, I purposely saved Taemin’s “Sayonara Hitori” for last. Why? Because my mind is officially blown. Not only is Taemin flawless with his beautiful eyes, beautiful hair, beautiful voice, and beautiful everything, even the MV itself has a series of breathtaking settings, all done with amazing computer graphics.

Everything was spun together so perfectly, and there even seems to be a story involved. . . I feel like this could really become an anime. If it did, I would seriously binge the life outta that in under a week. Just saying.

Have a Japanese MV from your favorite group/idol? Share in the comments below!