Recently, it was announced that Bae Doona and Cho Seung Woo had participated in the first reading for the upcoming tVN drama “Stranger” (also known as “Forest of Secrets”). This drama marks both actors’ return to Korean TV in quite awhile.

“Stranger” is a story that focuses on the two leads’ efforts to discover the truth hidden in a murder case. Cho Seung Woo will be playing Hwang Shi Mok, a cold and unfeeling prosecutor who is a loner. Bae Doona plays the part of Han Yeo Jin, a detective who is very just with a warm personality.

On May 3, the drama production staff released behind the scenes footage from the first day of filming!

Bae Doona talks about her first-day jitters despite being a veteran actress, explaining, “I’m nervous every time. Whenever I have a first day of filming, I don’t sleep well. (Laughing) Actually, sleep really just wouldn’t come [last night].” Interestingly enough, her co-star Cho Seung Woo revealed he had the same struggle, “Whenever I start a new project, I never arrive in the best condition because I spend the night before wide awake.” He added, however, that now that he felt very good about everything now that he was on set, and he complimented Bae Doona for doing so well. 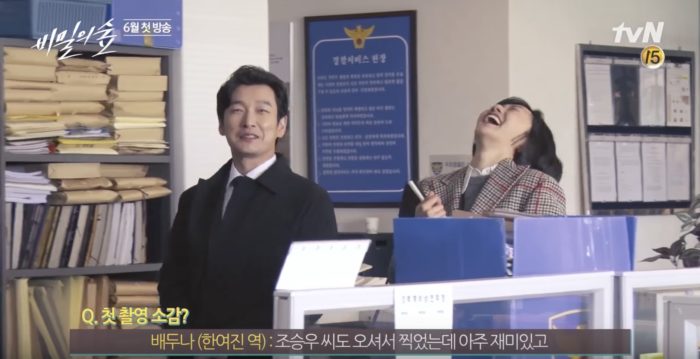 The behind the scenes footage also showed the two costars laughing and joking with each other as they prepared to film a scene on a set designed as a police station. Bae Doona shared during her interview portion, “Now that we’ve filmed half a day, it’s so much fun. The staff are all really great, Cho Seung Woo came to film a scene and that was really fun too. I have a good feeling about this.” Cho Seung Woo added in his own interview, “We talked about a lot of amusing things. And since Bae Doona is also a cheerful person, I think this is going to be really fun.”

Their interactions certainly show that they enjoying each other’s company, but fans anticipating this drama will be glad to hear that this dynamic seems to carry over positively into their acting as well. According to Bae Doona, “I think we’re going to complement each other well. He’s really fun, and our acting chemistry also seems to match well. I’m really really looking forward to this work.”

The two actors also promised to continue working hard, and they asked viewers to eagerly anticipate the drama’s release.

In addition to this behind the scenes clip, the production staff also released another teaser on the same day.

Cha Seung Woo is shown standing alone in a dark, chainlink path, while a mysterious voice over states, “This is unjust. I didn’t murder anyone. It’s all lies, it’s all a scam.” Cha Seung Woo’s determined voice is heard next stating, “A constructed truth. Everyone is a suspect with a motive.” This phrase is then repeated in a voiceover by Bae Doona as she slowly draws closer to an unseen target with a loaded gun.

Although the puzzle pieces aren’t all revealed yet, one thing is clear—not everything will be what it seems in this drama!

“Stranger” will air in June after “Chicago Typewriter” finishes its run.

Are you looking forward to joining Cha Seung Woo and Bae Doona on this mysterious adventure?